Crybully students demand that Mizzou give them free Pampers, with gender-neutral diaper changing stations installed in every campus bathroom 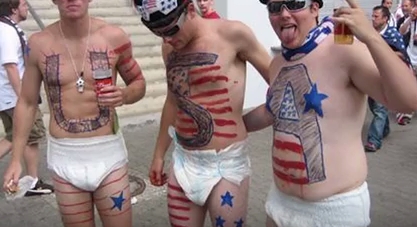 According to Webster’s, a crybully is a crybaby who is also an intolerant, racist bully. Well, the University of Missouri has been taken over by a bunch of crybully students, who are tearfully demanding “safe spaces” to protect themselves from such things as “mean words.”[1]

It all started with the formation of a student activist group called Concerned Student 1950, referring to the first year that Mizzou admitted African American students – way back in the days of Jim Crow, which is totally a thing of the past. After weeks of protest about campus racism that simply does not exist,[2] the group succeeded in forcing the university’s leadership to flee into exile.[3]

Dizzy with success, the group then demanded that the faculty’s palest members be fired, and that non-cracker student applicants be given preferential treatment for enrollment.[4] One of the ringleaders of the childish uprising, the tripped-out student body president Payton Head, is a suspected Obama operative who seems hell-bent on invoking a race war across America.[2]

As if all this weren’t infantile enough, these crybullies have launched a twitter campaign under the totally unfunny name #BlackPoopMatters, demanding that Mizzou provide them with free Pampers and oversized changing stations in every bathroom on campus. To meet the stringent demands of political correctness, they insist that the changing stations be gender-neutral, of course.

Bobby Buffington, a spokesman for Proctor & Gamble (maker of the Pampers brand), pointed out that Pampers are made only for infants, and that they would not fit any college student who weighed more than 12 pounds. “I suggest these crybullies get in touch with my archrivals at Kimberly-Clark, and see if they can cut Mizzou a deal on a shitload of their Depend underpants,” he advised.

When Mizzou professor Dr. Melissa Click was asked to comment on these latest developments at her university, she hurled obscenities and a dirty crybully diaper directly at this reporter’s head.

Writing politically incorrect parody is a messy job, but somebody’s gotta do it!