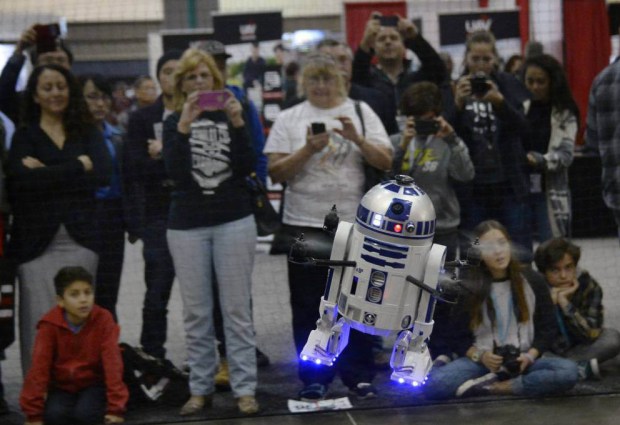 It’s a bird, it’s a plane, it’s…R2-D2? The world’s first flying R2-D2 took the crowd by storm at the International Drone Expo in LA this weekend, ahead of the much anticipated release of the new Star Wars: The Force Awakens film this week.

The flying duplicate of Stars Wars’ favorite android, dubbed Arturo by its creators, is the product of the combined genius of aerial cinematographer Donny Melara and LA-based aerial photography firm Air Cam Shots. Though its creators claim Arturo is the first flying replica of R2-D2, Otto Dieffenbach already debuted a similar flying Styrofoam model of R2-D2 equipped with a sealed quadcopter at this year’s Comic-Con.

R2-D2 took the audience by surprise when the droid used rocket thrust to fly in Star Wars: Attack of the Clones, something which it had never done in previous films. Mr. Melara’s drone is equipped with a moving head, LED lights and a speaker box to mimic the droid’s signature beeps and whistles. The drone clone is also equipped with a camera in its trademark eye and a navigation system.(1)

Mr. Melara was also responsible for the creation of the X-wing drone, the rebel ship used by Luke Skywalker to decimate the Death Star. As a resourceful droid, R2-D2 served Padmé Amidala, Anakin Skywalker and Luke Skywalker in all six films.

The physics of R2-D2

In 2010, physicist Rhett Alain from Southeastern Louisiana University studied the way R2-2D flew in the Star Wars: Attack of the Clones movie to determine if the droid was technologically feasible. By analyzing the thrust of the flight, its resistance and gravity, Alain concluded a flying R2-D2 is possible, provided the droid’s mass was 0.2 lbs.(1)

Alain’s project got off the ground when he started converting R2-D2’s flight into a free body diagram before solving for thrust, which was based upon Earth’s gravity and atmospheric resistance.

Although Star Wars fans revere the drone, the feeling may not be mutual with respect to the blockbuster sci-fi franchise. Pinewood Studios, where Star Wars: Episode VIII is to be filmed, fears drones could be used by crazed Star Wars fans to spy on the set and spoil the plot. The studio is currently in the process of trying to figure out how to prevent menacing drones from drifting onto the set during production.

Be aware of drones lurking near you with DroneWars.news, powered by Fetch.news.

Although Star Wars enthusiasts won’t be able to get their hands on their own flying R2-D2 for the holidays, a miniature version of BB-8 from the new Star Wars film will be available in time for Christmas. The droid can be controlled by a smart phone, customized to respond to your voice and can even produce holographic videos.

The device stands a mere six inches tall. The miniature droid consists of a small sphere with a movable head attached to a magnet, which enables the device to stand upright and roll along the ground.

Rob Maigret, Chief Creative Officer of Sphero, explained to the Daily Mail that it takes only four steps to activate the BB-8, which involves installing a smart phone app. Once activated, the toy immediately begins mirroring the personality of the droid in the highly anticipated film.(1)

Star Wars: The Force Awakens is the seventh installment in the franchise series and is set to be released December 17th. Its plot has been securely guarded; however, it is known many of the favorite characters from the first trilogy will appear in the latest installment. The film is expected to be one of the biggest, if not the biggest, box office hit of all time.