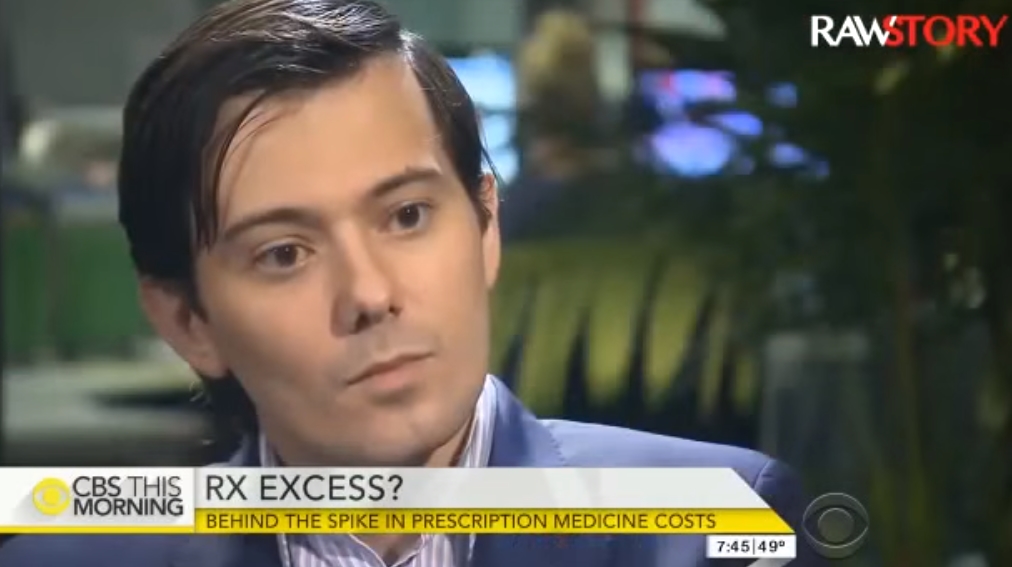 Martin Shkreli, the former hedge fund manager responsible for hiking the price of a drug used to treat infections from $13.50 to $750 per pill, was arrested by federal authorities Thursday morning in his posh “Midtown Manhattan apartment,” and charged with securities fraud, according to a report by The New York Times.(1)

Shkreli’s arrest appears to be an act of instant karma, coming just a few months after he sparked controversy for making life-saving drugs unavailable to those who desperately needed them.

His “corporate” attorney Evan L. Greebel, was also arrested. Shkreli, 32, is currently the chief executive and founder of Turing Pharmaceuticals, the company behind the recent price gouging. However, his recent run-in with the law is unrelated to the price increase of important drugs.

The charges against Shkreli reportedly stem from his position at MSMB Capital Management, where he ran the hedge fund and started the biotechnology firm Retrophin – which adopted the highly unethical strategy of bringing back old drugs used to treat rare disease and raising their prices substantially.

“Retrophin, for example, raised the price of Thiola, used to treat a disease that causes kidney stones, to $30 a pill from $1.50,” reports Boston.com. But Shkreli’s behavior was so appalling that the company replaced him as CEO last year “because of serious concerns about his conduct,” says Bloomberg Business.(2)

The charges filed against Shkreli are reportedly related to a civil lawsuit filed against him by Retrophin. Brooklyn authorities, who brought seven counts against him, say he was running a “Ponzi scheme.”

Shkreli is facing a maximum of 20 years in prison if he is convicted on all charges.

“In its lawsuit, Retrophin accused Mr. Shkreli of having used the company as a kind of personal piggy bank to help pay off upset investors who lost money at the hedge fund MSMB. Among the ways he did this, the lawsuit says, was by hiring some of these investors as sham consultants to Retrophin,” the Times reported.

Shkreli was the paradigm faithless servant. Starting sometime in early 2012, and continuing until he left the company, Shkreli used his control over Retrophin to enrich himself and to pay off claims of MSMB investors (who he has defrauded).

Shkreli is the son of immigrants from Albania and Croatia who worked as janitors and raised him in a working-class family in Brooklyn. Highly intelligent, Shkreli descended on Wall Street as a teen, before making a name for himself as the “poster boy for drug company greed.”

His reputation has only gone downhill from there.

Presidential front-runner Donald Trump called Shkreli a “spoiled brat,” and the BBC referred to him as the “most hated man in America.” Democratic presidential candidate Bernie Sanders even rejected campaign donations from Shkreli, instead giving the money to an HIV clinic.

The new charges filed against Shkreli could prevent him from running another public company, says Bloomberg.

Shkreli recently purchased a “majority stake” in KaloBios Pharmaceuticals, which acquired the license for an anti-parasitic drug used to treat Chagas disease – a problematic disease previously thought to be isolated in South America, but which has now spread into the southwestern U.S.

“The firm announced plans to increase the cost from a couple hundred dollars for two months to a pricing structure like that for hepatitis-C drugs, which can run to nearly $100,000 for 12 weeks.”

The plan is particularly evil considering the importance of the anti-parasitic drug benznidazole. Chagas disease is now endemic in places like Texas, a shocking revelation considering the Centers for Disease Control and Prevention originally estimated the disease to infect only one in 300,000 Americans.

Demand for drugs like benznidazole is expected to increase substantially, and people like Shkreli could make the life-saving drug unavailable to those who need it most.