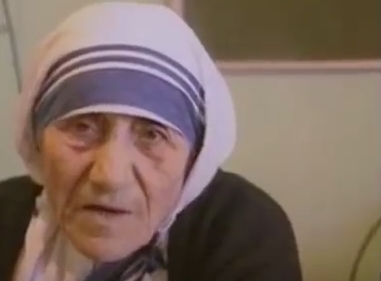 As everybody knows, Mother Teresa, who died in 1997, was the world’s most famous and beloved missionary, who devoted herself to the “wholehearted free service to the poorest of the poor.” However, some critics have been questioning her intentions, alleging that she was more interested in saving souls than saving lives, and they periodically emerge to drag her name through the mud.

It all started in the 1990s, with the publication of Christopher Hitchens’ book “The Missionary Position,” in which the author wrote, “Everything everyone thinks they know about [Mother Teresa] is false. It must be the single most successful emotional con job of the twentieth century.” In the same pages, he also wrote she “was not a friend of the poor. She was a friend of poverty. She said that suffering was a gift from God. She spent her life opposing the only known cure for poverty, which is the empowerment of women and the emancipation of them from a livestock version of compulsory reproduction.”[1] He also pilloried her for being cozy with dictators and corrupt politicians, though he did not mention that California governor Jerry Brown once worked for her.[2]

The most recent critic to enter the ring is George Gillett, a freelance journalist writing for Salon.com, where he summed up Mother Teresa’s charity as “reused needles, poorly trained staff and expired medications.”[3] Gillet’s hatchet job appeared not long after Pope Francis discovered a second miracle that Mother Teresa performed, which qualified her for sainthood. Her sainthood is expected to be officially bestowed on her by the pope some time this year.[4] Gillet is no doubt one of the critics who thinks she doesn’t deserve to be a saint, let alone so quickly, considering that some candidates take centuries to reach sainthood.[5]

Thomas D. Williams, Ph.D., a theologian at Notre Dame University, is one of the countless many who take exception to the critics, and stand up for the beloved nun. As he writes: “Mother Teresa was guilty, in fact, of the great modern sin of political incorrectness. She freely and unapologetically invoked her love for Jesus Christ as the reason behind everything she did, a practice that is anathema to a world antiseptically cleansed from the grime of religious sentiment…. Mother Teresa has been pilloried for her open Christianity despite the fact that she was an avowed enemy of proselytism in her work with the poor. She served without ever making conversion a condition or even an aim of her care.”[6]

And there’s no doubt about it — most of the world would agree with that.