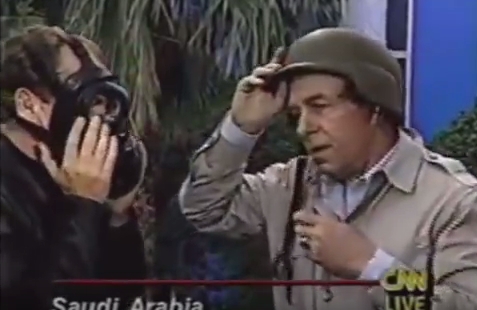 One of the most blatant and obvious forms of mainstream media fakery is the use of green screens, in which news reporters are superimposed on virtual backgrounds. As this compilation reveals, green screens are sometimes used to make it look like a reporter is on the scene, when, actually, he or she is merely on a soundstage.[1]

What the viewer sees is often distorted simply by the camera angle, as in the case of the famous staged toppling of the Saddam Hussein statue after the first Gulf War. [2]

“Video news releases” (VNR) are a much less obvious form of fakery. “The use of radio and video news releases is a little-known practice which took hold during the 1980s, when PR firms discovered that they could film, edit and produce their own news segments — even entire programs — and that broadcasters would play the segments as ‘news,’ often with no editing…. Video news releases are designed to be indistinguishable from genuine news, and are typically used as ‘story segments’ on TV news shows without any attribution or disclaimer indicating that they are in fact subtle paid advertisements. ‘Most of what you see on TV is, in effect, a canned PR product. Most of what you read in the paper and see on television is not news,’ says a senior vice-president with Gray & Company public relations.”[3]

“During the Gulf War build-up in 1990, Hill & Knowlton – which is the public relations firm handling the account for the royal family of Kuwait – Hill & Knowlton set up this separate organization called Citizens for a Free Kuwait. This was purely a public relations organization, and it was set up to look as if American citizens are joining together and of course they have one or two American citizens involved in it. I think one of the most effective parts of this campaign to get the country to go to war was a testimony given by a young girl, about fourteen years old named Nayirah. She testified before a Congressional Committee (unbeknownst to the public, this whole hearing was set up with the help of Hill & Knowlton). And she testified that she saw Iraqi soldiers come into a hospital and dump babies out of incubators.”[4]

These tricks, however, are only a small factor in how the mainstream media serves as propaganda for government and industry.