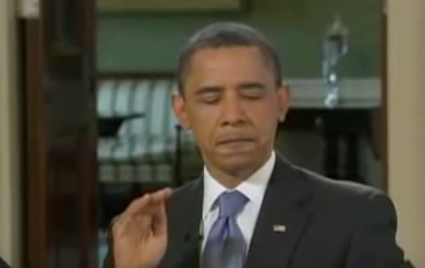 Barack Obama’s penchant for attracting flies has been widely noted. (See photo above of him swatting a fly during a televised interview.) The name “Beelzebub” in Hebrew means “Lord of the Flies,” which is fitting for a virtual unknown who came to a country of diverse people from all nations with the rallying cry which conquered the masses: “Yes we can.” [1]

Speaking of which, religious opponents of rock and roll have often heard sinister messages when playing recordings backwards, and when you play a recording of Obama speaking “Yes we can” in reverse, it has been alleged to sound like, “Thank you, Satan.” Is this a demonstration of charisma compelling worship by the masses foretold for the antichrist in Corinthians 11:14-15?

To some, the very middle name “Hussein” is evidence in itself (derived from Hasayn ibu Ali, son of Ali and grandson of Prophet Muhammed), especially with the first and last names being six letters each, as with the 60606 numbers of his Chicago power zip code or the Chicago winning lotto number of 666 the day following his election.[2]

As others have noted, biblical evidence of Obama as the antichrist is also present in his promise of peace but delivery of the opposite, the appointment of an assassination czar and drone-killing numerous civilians around the world.

It has also been alleged that only the antichrist would graciously receive a person pleading for investigation into 9-11 while knowingly gifting her airplane tickets for a flight that crashed and killed her, as is the case of Beverly Eckert.[3]

There are numerous examples given of behavior befitting the antichrist in the Obama Nation. For example, we have the promise of universal healthcare which was fulfilled instead by a mandate written by the insurance industry to buy a corporate product under penalty of IRS enforcement, thereby increasing premiums and co-pays while paralyzing healthcare practitioners’ medical judgment — all under the euphemistic label, “universal health care.” Is this an example of the very definition of antichrist behavior, i.e., doing the opposite of what is Christ-like or the opposite of what is being said?[4]

Even Obama’s sense of humor is said to be befitting of the antichrist, such as his remark at the 2015 White House Correspondents’ Dinner: “Michele Bachmann actually predicted I will bring about the Biblical end of days. Now that’s a legacy — that’s big. I mean, Lincoln, Washington — they didn’t do that.”