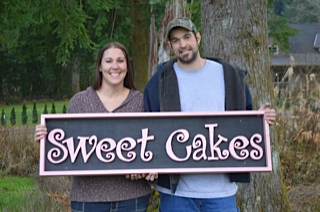 In the age of Obama, politically incorrect miscreants must not be simply silenced and punished, but destroyed.

As noted by Fox News and Truth Revolt, shortly before Christmas, Melissa Klein, who along with her husband had been found “guilty” by the state of Oregon for the heinous crime of following their Christian faith, made a startling discovery: While checking her bank accounts, she discovered that every penny had been taken.

What happened? The Oregon Bureau of Labor and Industries had “confiscated” (stolen) the money in Melissa’s checking and savings accounts, as well as in a special account set aside for their church tithe.

The Kleins, you may recall, are devout Christians and one-time business owners of a mom-and-pop bakery, Sweet Cakes by Melissa.

In July, the state ordered them to pay more than $135,000 in “damages” to a lesbian couple, after the Kleins, on religious grounds, refused to bake them a cake explicitly supporting gay marriage. The Kleins refused because, as Christians, they don’t believe in same-sex marriage.

Headed to the Supreme Court?

The state didn’t see it as a First Amendment issue; they saw it as illegal bigotry and awarded the lesbian couple the judgment for their “emotional suffering.”

Just a couple of weeks before Christianity’s most holy day, Labor Commissioner Brad Avakian took it upon himself to wipe out the Kleins’ family bank accounts – grabbing almost $7,000.

In the face of a state-mandated 9 percent interest penalty on any unpaid fine amounts, the Kleins decided to pay the controversial and disputed amount in full, so they wrote the state a check for $136,927.07, Fox News reported. The money was not in their bank account; it was the result of a massive donation effort nationally to help the couple pay the outrageous fine for daring to adhere to their religious beliefs.

“It was like my breath was taken away,” Melissa told Starnes over the phone. “I panicked. Everything was gone.”

And as noted, Avakian even took money from the Kleins that was reserved for the Big Guy.

“We had three accounts,” Melissa said. “I have one account that’s labeled, ‘God’s money’ – our tithing. They just took it.”

Tyler Smith, an attorney who represents the Kleins, told Starnes that his clients are still planning on battling the state’s ruling, and that’s even if it goes all the way to the U.S. Supreme Court.

“The least expensive option to stay in compliance with the law was to pay the Oregon Bureau of Labor and Industries funds that will be kept in a separate account until they prevail in their court appeal,” Smith said in a prepared statement. He went on to explain that the hapless couple had requested that the state delay its collection attempts, but their request had been denied.

“Aaron and Melissa will continue to work to ensure that every American has the First Amendment right to express their faith-based beliefs, and to conduct their daily affairs according to their conscience,” Smith said.

Their trouble started in 2013 when Laurel and Rachel Bowman-Cryer asked the Christian bakers to prepare their wedding cake.

When Mr. Klein explained that they would not be able to prepare the cake, the women filed an anti-discrimination complaint with the state of Oregon.

The state later determined that gay rights trump religious liberty – ruling that the Kleins had violated the lesbian couple’s civil rights by discriminating based on sexual orientation, even though they weren’t actually discriminating based on sexual orientation. The Kleins would have been happy to bake any other kind of cake for the lesbian couple, but because they have a sincere religious belief that is incompatible with supporting gay marriage, they politely refused to bake a gay wedding cake.

The administrative judge presiding over the case would later concede that the lesbian couple was “exaggerating” about their “emotional suffering” but nevertheless fined the Kleins a total of $135,000, more than twice the median U.S. income.

It should be noted that the state of Oregon has a law that protects the rights of gays, lesbians, bisexual and transgendered people in employment, housing and public accommodations (like federal civil rights laws). And it also prohibits private businesses from discriminating against potential customers based on such grounds.

But does a state law trump the U.S. Constitution’s First Amendment guarantees of religious liberty, freedom of association and free speech? What would have happened in Oregon, say, if a lesbian or gay couple had requested – and been refused – a wedding cake by a Muslim baker?

The state violated the Kleins’ First Amendment rights in other ways too, banning the couple from publicly discussing the case. Also, Avakian has publicly stated that his goal is to continue targeting Christian business owners who don’t comply with the state’s line of thinking.

Be warned, Oregonians: Your state doesn’t care about your religious liberties.