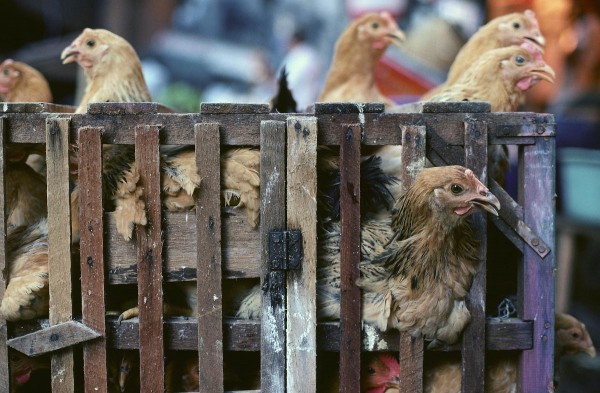 Healthy food activists rang in the New Year with an exciting victory in the fight for cleaner, healthier food, after the U.S. Food and Drug Administration (FDA) officially kicked arsenic-based animal drugs to the curb; hopefully for good.

As of Dec. 31, 2015, the FDA withdrew approval for all applications of nitarsone (or Histostat), an arsenic-containing drug used in animal feed, that’s been linked to arsenic contamination in chicken meat. Nitarsone was the last remaining arsenic-based drug for use in animal feed on the U.S. market.

Livestock producers say they used nitarsone to combat blackhead disease; however, it and other arsenic-based drugs also increase weight gain and create a “healthy color” in poultry meat, according to Food Poisoning Bulletin. ­­(1)

Though controversial, and highly unsafe, arsenic-based drugs have been used by poultry and turkey producers in animal feed since the 1940s. The FDA approved Roxarsone (or 3-Nitro) on March 21, 1944, “to help prevent coccidiosis, a parasitic disease that infects the intestinal tracts in poultry.”(2)

Nearly 70 years would pass before the FDA finally acknowledged the horrifying fact that the majority of chicken meat sold in the U.S. contained cancer-causing arsenic.

After years of sweeping the issue under the rug and hoping no one would notice, the FDA has now finally admitted that chicken meat sold in the USA contains arsenic, a cancer-causing toxic chemical that’s fatal in high doses. But the real story is where this arsenic comes from: It’s added to the chicken feed on purpose!(3)

The company behind two of the most widely used arsenic-based animals drugs is none other than pharmaceutical giant Pfizer, the same company responsible for producing chemical adjuvant-containing vaccines, that have proven harmful time and time again.

Pfizer poisoning people and animals with its chemical-laden products

In April of 2015, Zoetis Animal Health told the FDA in a letter of commitment that it would “suspend sale of the drug Histostat (nitarsone) in the fall of 2015 and will request that FDA withdraw the approval for the drug by the end of 2015.”(4)

Nitarsone is the only arsenic-based animal drug that is currently approved for use in food animals. Nitarsone is approved for the prevention of blackhead disease (histomoniasis) in turkeys and chickens, but is predominantly used in turkeys.

Zoetis holds three approved animal drug applications for nitarsone: Histostat-50 (approved for use in chickens and turkeys for prevention of blackhead); and two combination use approvals, BMD/Histostat and Albac/Histostat (approved for use in turkeys for prevention of blackhead). All three uses would cease to be marketed upon withdrawal of the nitarsone approval.

The health risks associated with arsenic-contaminated meat were reported as far back as 2007, when the American Chemical Society admitted that pets aren’t the only organisms affected by this toxic additive.

For years, the FDA defended the use of arsenic-based drugs, claiming that only organic arsenic (non-carcinogenic and the least toxic form), was used in animal feed, and that the majority of it was excreted through poultry feces.(5)

However, in the April 9 issue of Chemical & Engineering News, the weekly news magazine of ACS, scientists acknowledged that under the right conditions, the organic arsenic used in animal feed morphed into the more toxic inorganic arsenic.

“In its original form, roxarsone is relatively benign. But under certain anaerobic conditions, within live chickens and on farm land, the compound is converted into more toxic forms of inorganic arsenic,” said the ACS.

“Arsenic has been linked to bladder, lung, skin, kidney and colon cancer, while low-level exposures can lead to partial paralysis and diabetes.”

So there you have it; it took our regulatory agencies at least nine years to eliminate drugs they knew were harming public health. What else are they hiding?