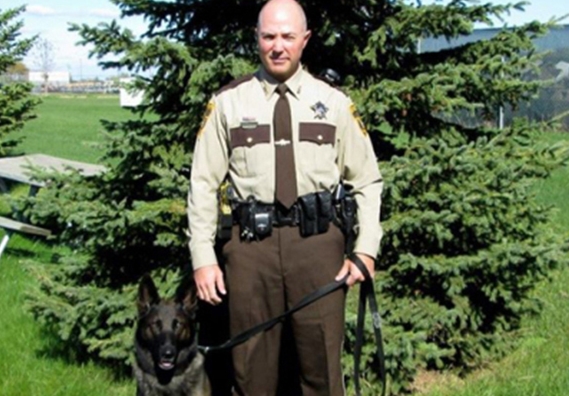 A Minnesota police officer was caught on video violently abusing his K-9 police dog, Boone in the parking lot of a casino. Ramsey County Deputy, Brett Berry is seen dragging the animal by its neck across the cold, snowy pavement. Trying to escape the abuse, the dog runs towards the entrance of the Black Bear Casino and Resort, cowering before being mercilessly beaten again by the cop, who along with other sheriffs, was staying at the hotel for police dog certification trials.

The 48-year-old deputy beats Boone with what appears to be all of his strength, striking him repeatedly. Black Bear security staff reported Berry to the Carlton County police, after customers complained that the cop was pushing “unwanted advances” on casino goers.

When security confronted the intoxicated deputy, he reportedly responded with “obscene gestures,” before returning to his room. Shortly after, the casino’s surveillance cameras captured footage of Berry abusing the police dog before aggressively dragging him across the ground.

Police dog cowers while being beaten by handler of four years

The Ramsey County deputy was charged with animal cruelty and assaulting a public safety dog before being placed on administrative leave, reports USA Today. Officer Berry blamed the beatings on his inebriated state, admitting in the courtroom he was “blackout drunk.”

“But he got very intoxicated and he struck his dog in a way that is inexcusable. He said that in court. And that has been his position all along,” said Barry’s attorney Kevin Short.

Barry had reportedly worked closely with Boone for four years. He was removed from Barry’s custody while his department investigated him. Fortunately, the dog did not suffer from any physical injuries.

Short lacked a good defense for Barry, digging his client even deeper after insinuating that the cop’s separation from Boone was punishment enough.

“He has already received an extreme consequence. His dog was removed from him the minute this came to light. That’s an extreme emotional consequence,” said Short. “It’s also a significant financial consequence for a person who is a K-9 officer.”

While it’s unclear exactly what Short meant when he said losing a police dog is a “financial consequence” for a K-9 officer, he’s likely referring to the pay cut Barry was forced to take.

Charges for assaulting a public safety dog were dropped after Barry pled guilty to animal cruelty. He was allowed to remain employed by the Ramsey County Sheriff’s Office, but will be reassigned to a new role, USA Today is reporting.

A handful of animal rights activists attended Barry’s hearing, saying they felt satisfied with the results compared to other animal abuse cases.

“We got a little more justice in this one, it seems,” said Jan Stern of Duluth, Minn. “I understand that he knows that he did wrong. And if he was that intoxicated, maybe it’s time he receive treatment,” she said.

However, Barry’s punishment doesn’t seem harsh enough. The charges that an ordinary Minnesotan would face for killing or harming a police dog, or any type of service animal for that matter, ranges from a gross misdemeanor to a felony crime, both of which may result in up to two years in prison and a maximum of a $5,000 fine.