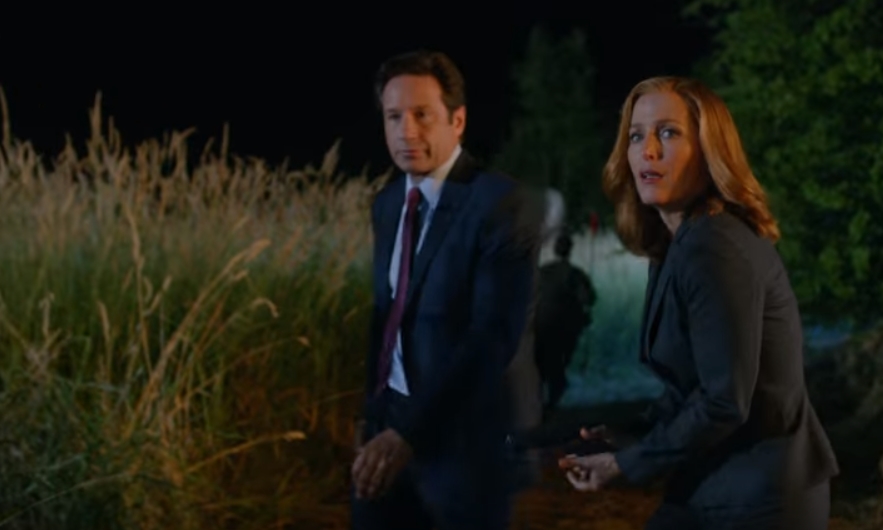 After a nearly 14-year hiatus, The X-Files returned with a bang Sunday night leaving viewers on the edge of their seats as FBI Agent Fox Mulder (played by David Duchovny) told FBI Agent Dr. Dana Scully (played by Gillian Anderson) that everything they’ve “been led to believe is a lie.”

Duchovny’s return to The X-Files was beyond epic as he effortlessly slipped back into his charismatic role of Fox Mulder, a.k.a. “Spooky.” Anderson’s performance was equally riveting as the red-haired actress looked better than ever, appearing as though she hadn’t aged since the sci-fi series first aired in 1993.

Part one of a two-part premier, the “My Struggle” episode turned out to be profoundly suspenseful and included plenty of action, with the opening scene featuring a realistic-looking UFO that crashed into a New Mexico desert, its alien pilot still alive inside. Naturally, the government quickly arrives to cover up the scene, disposing of the evidence before killing the alien that piloted the ship as it tried dragging its injured body to safety.

Mid-way through Episode 1, Mulder tells Scully they “have been misled” and that it is not in fact aliens that have been abducting and experimenting on people, but men. The U.S. government has been in possession of alien technology for more than 70 years and is using it against the American people, says Mulder, referring to the National Security Agency’s dragnet surveillance that constantly tracks the public and their whereabouts.

“They are tracking us through our phones,” says Mulder. “They’re tracking everything we do.”

The X-Files plot thickens as it continues to mirror current political events, with Mulder referencing today’s conspiracy theories including the allegation that 9/11 was a false-flag attack and that a “small group of men” are actively trying to take over America and eventually the world – waging an all-out unstoppable war against humanity.

The new X-Files episode also talked about climate wars and the perpetual conflict in the Middle East, warning of a “sixth extinction” that will wipe out humanity, while the wealthy elite escape and flee to another planet.

The conspiracy, Mulder says, is not about aliens trying to take over the Earth, but rather a group of rich and powerful men aligned with the world’s corporations who intend to destroy humanity as we know it. But that of course didn’t stop Mulder, who vows to expose the truth and the sinister plan to take over America.

Stay tuned for part two which airs tonight of Fox at 9:00 p.m. Central.