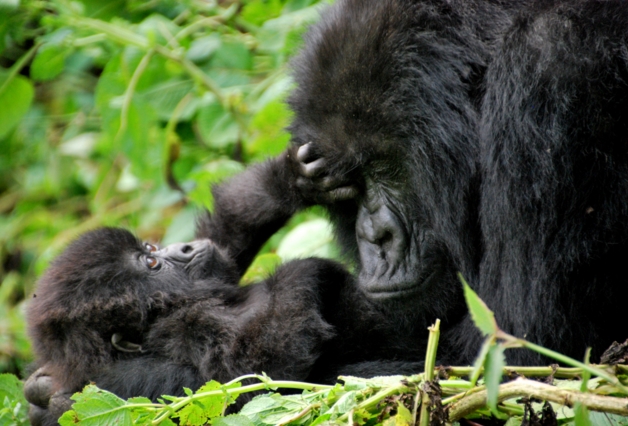 The Mountain Gorilla, a subspecies of the eastern gorilla living in Africa, is on the brink of extinction “due to detrimental human activity, such as poaching, civil war, and habitat destruction,” according to AnimalFactGuide.com. The “critically endangered” animal was placed on the IUCN Red List of Threatened Species after researchers discovered that there was only about 300 mature gorillas left living in Africa eight years ago.

While the animals have few natural predators, a new threat has emerged: poacher traps. Traps or snares are often placed in Rwanda’s Volcanoes National Park by “local bush meat hunters” trying to catch antelopes and other animals to eat.

Though the hunters have no interest in primates, young Mountain Gorillas are increasingly becoming caught in the traps, unable to free themselves due to their size. Sadly, gorillas caught in the traps either die or severely injure themselves while trying to escape – suffering from broken bones and gaping wounds.

“The traps work by tying a noose to a branch of bamboo stalk, and bending it down to the ground, with another stick or rock used to hold the noose in place. The whole thing is obscured by dry leaves and branches,” according to Science Alert.

“When an animal comes along and unknowingly moves the anchoring rock or stick, the branch flings back up and tightens the noose around it, holding it in place till the poachers come looking.” Smaller animals weighing less are sometimes hoisted into the air, says Ker Than, a writer for National Geographic.

Trying to prevent the death of young gorillas, researchers set out to disable traps hidden near gorilla clans when they witnessed something remarkable: a dominant male confidently disabling one of the snares.

“This is absolutely the first time that we’ve seen juveniles doing that… I don’t know of any other reports in the world of juveniles destroying snares,” Veronica Vecellio from the Dian Fossey Gorilla Fund’s Karisoke Research Centre in Rwanda told National Geographic. “We are the largest database and observer of wild gorillas… so I would be very surprised if somebody else has seen that.”

After finding a trap near the Kuryama gorilla clan, “which had lost one of its juveniles to a trap just days earlier,” John Ndayambaje, a tracker, tried dismantling the snare but was forced to back off when a dominant male began exhibiting signs of aggression.

“Suddenly two juveniles – Rwema, a male; and Dukore, a female; both about four years old – ran toward the trap,” Than wrote. “As Ndayambaje and a few tourists watched, Rwema jumped on the bent tree branch and broke it, while Dukore freed the noose.”

Researchers report that three gorillas working together disabled another snare, as well. “The researchers suspect that the confidence and speed with which they destroyed the traps means these young gorillas had learnt how dangerous they were, and had dismantled them before.”

Mountain gorillas are known for living in packs up to 30 and are both shy and strong. If they feel threatened, they can become aggressive, beating their chests while letting out loud, angry roars. Groups are normally led by an alpha male called a “silverback.”

Alpha males provide protection for the other gorillas, as well as divide chores and activities among the group. They dictate feedings, resting time and travel, while also fathering the majority of group’s young.

If you’re interested in helping preserve mountain gorillas, the Mountain Gorilla Veterinary Project offers 10 ways you can so. Click here to learn more.