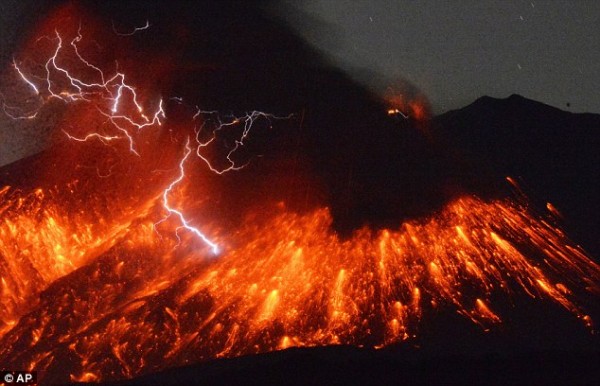 One of Japan’s most active volcanoes, Sakurajima, ended months of silence upon erupting last Friday evening, sending a steady stream of lava down its slope. The blast took place just 50 km from the Sendai nuclear station, which is home to the first reactors to be restarted since the 2011 Fukushima disaster.

Videos of the eruption capture the volcano belching a fiery ball of lava, and releasing ash hundreds of meters into the air, generating its own “volcanic” lightning.

The country’s meteorological agency issued an orange warning to not approach Sakurajima. Officials banned entrance to the region by widening an existing no-go zone around the crater, to a radius of 1.2 miles. No immediate injuries have been reported.

A mild but unique eruption

Friday’s eruption was relatively mild in comparison to its predecessors. Sakurajima’s last major eruption took place in September 2015. What made the recent eruption unique is that it followed months of relative inactivity from the mountain. The volcano has produced hundreds of eruptions per year in the last half-century.

Residents were evacuated last August when a warning for the volcano was lifted to its second highest level. The 1914 Sakurajima eruption was the most violent eruption Japan experienced in the 20th century. The lava flow swallowed the strait, disconnecting the island from the mainland, and reshaping the region into a peninsula.

Despite these concerns, the government claims that the Sendai nuclear power plant passes the highest and strictest safety standards in the world. Sendai was designed to withstand tsunami waves 15 meters high, which is well below the 2011 tsunami wave, standing 40 meters high. Sendai remains in operation, but many activists are worried that the volcano could pose serious safety concerns.

One of the great failures of the Fukushima disaster is that officials did not have a well-prepared evacuation plan in the event of a natural disaster. Residents worry that Sendai’s evacuation plan has similar shortcomings, especially for the evacuation of nearby nursing homes.

Although the Fukushima disaster occurred almost five years ago, it still resonates in the heart and soul of many Japanese citizens. Decommissioning the power plant has been a slow, tedious, expensive and dangerous process. Best estimates suggest it will take at least 40 years to clean up the area. It was the second worst nuclear accident in history, shortly following the 1986 Chernobyl catastrophe.

The Fukushima disaster caused Japan to shut down all of its nuclear facilities in 2011, even though 30 percent of its electricity was previously produced by nuclear power.

Unfortunately, earthquakes and volcanoes are not uncommon to Japan. The country sits atop the Pacific Ring of Fire, which is home to more than 100 volcanoes. The 2014 eruption of Mount Ontake in central Japan claimed the lives of 57 people.

You can watch the recent Sakurajima eruption in action in the video below.