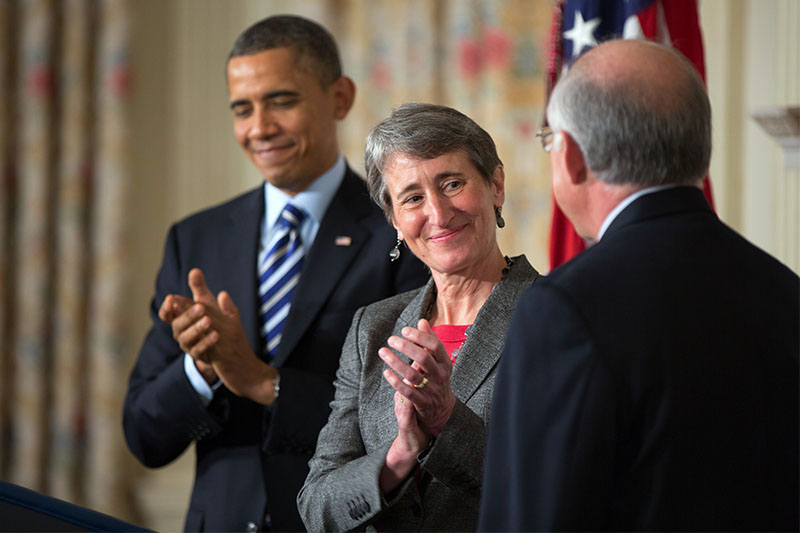 (Bugout.news) You may not have known but the Obama White House just finished up the first-ever “earthquake summit,” which brought together the country’s best seismologists and Interior Secretary Sally Jewell. But why now and what areas of the country are most at risk are the more important questions.

As reported by McClatchy Papers, the first-ever “Earthquake Resiliency Summit” took place last week, spurred on by new fears that the “Big One” will soon be rattling the West Coast. As such, the administration proposed stronger efforts to prepare for earthquake-related devastation.

Private foundation grants will fund new research at universities in California and Washington state, the Forest Service will streamline the placement of seismic monitoring stations and a presidential order will tighten standards for new federal buildings.

“While no one can predict earthquakes, the study of natural hazards and their causes and impacts has put us on the path to creating more effective tools to prevent these hazards from becoming disasters,” Interior Secretary Sally Jewell said.

Over the course of several hours summit participants discussed and exchanged information in a live-streamed format aimed at employing the weight of the White House to urge new preparedness action on the state and federal levels, as well as the private sector.

“We have the real opportunity to mitigate damage and save lives if we act now on an early warning system,” said summit participant Rep. Adam Schiff, D-Calif., adding that “the federal government cannot, and will not, fund the system in its entirety.”

Seismologists and other experts say that, in theory, early notification of an impending quake – even if it’s just a few seconds – would help. Transit systems could slow trains; pipelines could be closed off; first responders could be alerted; power would be rerouted; other public sector utilities could be warned as well.

Since January 2012 a so-called “ShakeAlert” system has been under development. It sends live seismic alerts to test users; the Gordon and Betty Moore Foundation announced it would contribute an additional $3.6 million to further its development.

But why hold the summit now? Apparently seismologists, geologists and others believe that the Big One is inevitable.

The U.S. Geological Survey believes that the state of California is likely to suffer a quake on the magnitude of 6.7 or higher in the next 30 years. Meanwhile, the Pacific Northwest has a 10 percent chance of a quake on the magnitude of 8 to 9 along the Cascadia subduction zone underneath the Pacific Ocean. That catastrophe was detailed in a July 2015 New Yorker magazine article that caught the attention of government and private-sector officials.

How common are quakes around the world? The USGS said there were 14,588 earthquakes of magnitude 4.0 or greater throughout the world in 2015; California has scores of quakes every week but most are not felt by residents.

There are other parts of the U.S. where the Big One could strike. The New Madrid Fault Line “is a major seismic zone and a prolific source of intraplate earthquakes in the southern and Midwestern United States, stretching to the southwest from New Madrid, Missouri” in the boot heel (southeast corner of the state), according to Wikipedia. There is so much concern about that fault that the Missouri National Guard and the Guard in surrounding states hold major response training exercises periodically to prepare for it.

The last time the fault line erupted was in 1811-1812; at one point quakes were so strong the Mississippi River actually ran backwards.

“We cannot predict the time of the next earthquake,” USGS seismologist Lucy Jones, who has served as a science adviser to Los Angeles Mayor Eric Garcetti, told McClatchy Papers. “However, we can tell you what will happen.”

Major earthquakes will cause death, widespread destruction of infrastructure and roads, and power outages. Communications via normal modes (cell phones, land lines, radio) will be disrupted and probably for some time in the affected areas. There will be panic and, for a time, paucity of resources. Police and other emergency responders will be stretched to their limits.

The Guard will eventually make it to the scene in numbers sufficient to provide assistance and security, but they will take several hours to days to deploy, given that Guardsmen, as part-time soldiers and airmen, will also be affected by the quake (including their families). Many may not even respond to call-up, opting instead to remain with their families and local communities. Many may not even be reachable due to downed communications; some may have been killed in the initial quake.

It’s entirely possible that your plan to shelter in place during times of emergency will have gone by the wayside if you no longer have a house to shelter in. Earthquakes (and tornadoes) tend to do that. This is why it is important to have Plan A, B, C and even D ready to implement.

City, state and federal government experts, along with a number of organizations and private entities, are preparing for the Big One. And that means, depending on where you live, you should be, too.