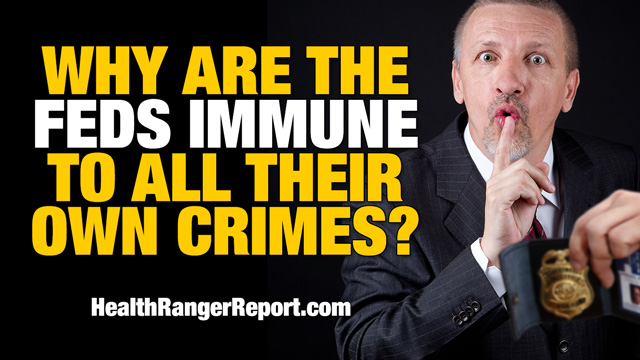 When the BLM sets “controlled burn” brush fires all across America, nobody who works for BLM gets prosecuted with arson. But when private citizens do the same thing, they’re prosecuted as “terrorists” and sent to prison for five years.

When the EPA dumps millions of gallons of toxic sludge into a river, nobody gets prosecuted or goes to jail. But when a private citizen or business contaminates a river, they get imprisoned for “environmental crimes.”

When Hillary Clinton releases state secrets via unprotected emails, she gets a free pass on prosecutions. But when some private citizen gets caught violating national security laws, they get sent to prison.

When the U.S. Treasury counterfeits money — “quantitative easing” — to hand out free dollars to all their bankster friends, nobody goes to jail. But if you or I started printing hundred dollar bills on our own, we’d be imprisoned for a long, long time.

I could go on, but you get the point: Employees of the federal government seem to have absolute legal immunity for the exact same crimes that get private citizens charged with felony crimes, aggressive prosecuted and sent to prison.

If this were a truly free and just society, ALL PEOPLE would be subject to the same laws, no matter their employer. But because we live under a police state tyranny, those individuals who work for the largest mafia of all — the federal government mafia — are granted selective immunity for their crimes.

For more information, be sure to check out HealthRangerReport.com.