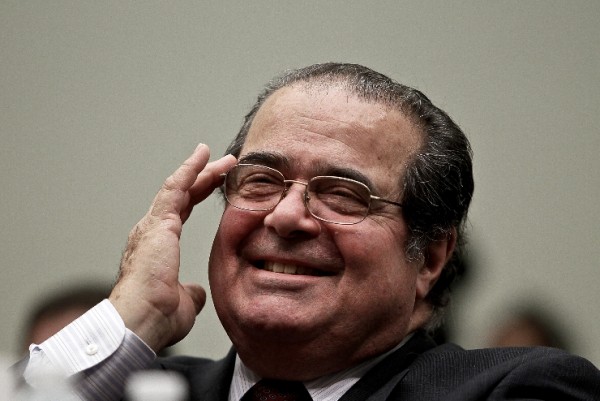 U.S. Supreme Court Justice Antonin Scalia, 79, was found dead inside his hotel room at a Texas hunting resort Saturday. The resort owner said he discovered the constitutionalist judge lying “peacefully” in bed dressed in his pajamas. Officials maintained that “there were no signs of foul play” and ruled that the judge’s death was due to natural causes, despite reports that he was found with “a pillow over his head.”

Justice Scalia was reportedly suffering from “health issues,” according to Presidio County Judge Cinderela Guevara, who pronounced the judge dead without viewing the body or having ordered an autopsy, an act permissible under Texas law, reports The Washington Post.

Guevara said she spoke with Scalia’s physician in Washington, D.C., who confirmed the former judge suffered from “a host of chronic conditions” and had previously visited his office two times during the week of his death.

Several hours passed before authorities were able to locate a justice of the peace in remote West Texas. A second justice of the peace, who was unable to be available as quickly as Guevara, said she “would have ordered an autopsy.” But the family reportedly didn’t want one – a decision some believe is unsatisfactory.

An investigation is warranted

“Anytime a head of state, member of Congress, or the most conservative member of the U.S. Supreme Court is found dead, an extensive autopsy and toxicology examination should be both immediate and mandatory,” William Gheen, president of the Americans for Legal Immigration political action committee told World Net Daily.

News that the El Paso funeral home had already embalmed Scalia’s body a mere 24 hours after his death surprised many, and due to his powerful position on the U.S. Supreme Court, opened up the possibility that foul play might have been involved.

“The horrid reaction and comments about his death expressed by many liberals online illustrate that Scalia was hated by many people,” continued Gheen, adding that his death “hands the power of the Supreme Court to the modern left for the first time in American history. The court can now vote, even without a replacement of Scalia, to radically change the United States of America.

“Scalia’s death means the Supreme Court is now very likely to rubber stamp Obama’s unconstitutional amnesty orders, tear down Republican drawn districts in many states including North Carolina, and take deep left turns on abortion, gun rights, or anything the liberals have ever dreamed of. Scalia was a solid vote against Obama’s immigration orders to be decided by April of this year,” said Gheen.

“We do not contend there is a conspiracy, we contend that there should be no doubts, and the way authorities and the media are rushing conclusions will leave major doubts and legitimate concerns about a death that could lead to a radical political transformation of America to the left.”

Scalia and a friend traveled to Cibolo Creek Ranch on a hunting trip, one his most beloved past times, according to those close to him. After spending the day hunting blue quail, Scalia reportedly attended a private party that evening before retiring to his room for a good night’s rest.

The resort owner grew concerned after the judge failed to show up for breakfast, prompting him and another person to knock on Scalia’s door, leading to the discovery of his death.

“After a brief stint at the conservative American Enterprise Institute and a teaching post at the University of Chicago Law School, Antonin Scalia accepted an appointment from President Ronald Reagan on the Court of Appeals for the District of Columbia in 1982,” reads Biography.com’s page on Justice Scalia.

“As a Supreme Court Justice, Antonin Scalia was considered to be one of the more prominent legal thinkers of his generation. It was also through his blunt (some would say scathing) dissents that he earned a reputation as combative and insulting. And yet to many who knew him personally, he was unpretentious, charming, and funny.”