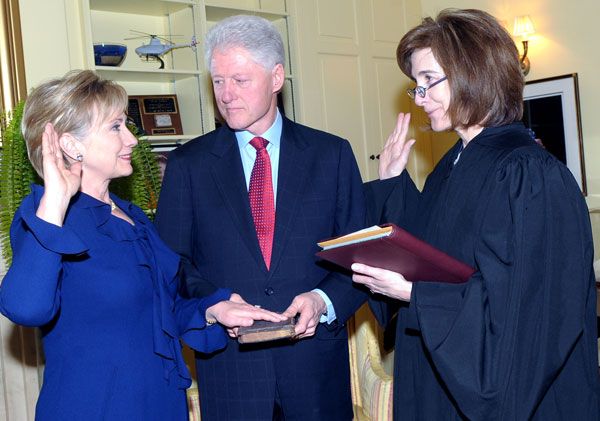 Millions of Americans who will vote for a new president later this year, had no idea who Bill and Hillary Clinton really were – until she entered the race for the Democratic presidential nomination. Now, they’re finding out that the couple once compared to John Kennedy’s “Camelot,” behave more like dungeon-dwellers instead of royalty.

As Hillary has tried to sell herself as a champion of women and women’s rights, she has stuck by one of the most philandering presidents in the history of our country, most likely because she believed it served her political ambitions. Called “bimbo eruptions” during the first Clinton administration, Hillary was seen as instrumental in working to undermine and discredit a series of women who claimed that they either had voluntary or involuntary sexual encounters with her husband.

The names were oft-repeated during Bill Clinton’s tenure: Paula Jones, Gennifer Flowers, Kathleen Willey – and, now, Sally Miller, a.k.a., Sally Purdue, a former Miss Arkansas. Sally says that she not only had sexual trysts with then-Arkansas Gov. Bill Clinton, but that Hillary is “a lesbian” who she believes is out to get her.

As reported by the UK’s Daily Mail, Miller says that Bill Clinton was an average lover who used to divulge more than a few secrets about his wife when they were seeing each other in 1983. One time, she says, he slipped on her frilly black night gown and danced around her bedroom tooting his saxophone.

This playful scene was typical of the laughter-filled nights that ex-beauty queen Miller enjoyed with Bill Clinton during their 1983 affair, she tells Daily Mail Online in an exclusive interview.

The married Governor of Arkansas would frequently adopt the role of entertainer-in-chief to impress his glamorous older woman, a one-time Miss America finalist.

But while his attempts at lovemaking were largely forgettable, Clinton would rarely disappoint when it came to divulging intimate and potentially damaging secrets about his wife Hillary.

Now, more than 30 years later, Miller – a onetime singer and radio host known as Sally Purdue – is getting ready to spill more intimate details in an upcoming tell-all book that most likely got in the works shortly after Hillary decided to run for the presidency.

‘If I die by ‘suicide’ don’t believe it’

Miller says her memoir will detail a series of unguarded conversations where she claims that Bill said his wife prefers female intimate companionship. And she also believes that Hillary is behind a plot to keep her quite ahead of the nomination process and, if she wins, the November elections.

In addition, she says the book lays bare a decades-long attempt by Democrats to harass and discredit her – Hillary worked overtime to discredit the other women as well, though Bill admitted (finally) having sex with White House aide Monica Lewinsky in the mid-1990s and he was forced to pay Jones hundreds of thousands of dollars after he agreed to settle a sexual harassment lawsuit. Miller says the harassment has become so intense and perverse that she now fears for her life (another good reason to go public now).

Miller, 77, recently took to social media to post an ominous warning – that if she dies by “suicide” nobody should buy it.

In an interview with the Daily Mail at her Arkansas home, she said that she’s been stalked, spied upon and victimized with anonymous phone calls since word that her memoir was coming leaked out.

“With the election coming up she can’t afford any sort of loose end. She’s the closest thing you can imagine to Al Capone. I don’t think she is going to rest until she puts me to rest,” Miller added.

“Let’s just get down to the facts”

What accusations and allegations are so damaging or insulting that a presidential candidate would unleash an army of operatives to intimidate or even kill an older woman?

“Hillary is a lesbian,” Miller said, repeating a lingering, but thus far officially unsubstantiated, rumor that has dogged the former first lady for years (this writer has been told by trustworthy sources that Arkansas troopers assigned to guard then-Gov. Clinton have admitted that women used to visit both of them – separately, and separate women).

“Let’s just get down to the facts,” she continued. “Firstly, Bill didn’t mind telling me that Hillary doesn’t like sex. I take him at his word and he told me she liked females more than men. She was the child of a more progressive community. She was exposed to all the liberals, she was a flower child.”

In addition, Miller said, “Hillary does drugs too, that’s the only time that she would entertain the idea – again, this is what Bill told me. While we were intimately involved he would say things like ‘gosh you need to come over and teach Hillary a few things.’”

She added: “He said she probably wouldn’t take to that idea much.”

Miller also said she sleeps with a handgun under her pillow.