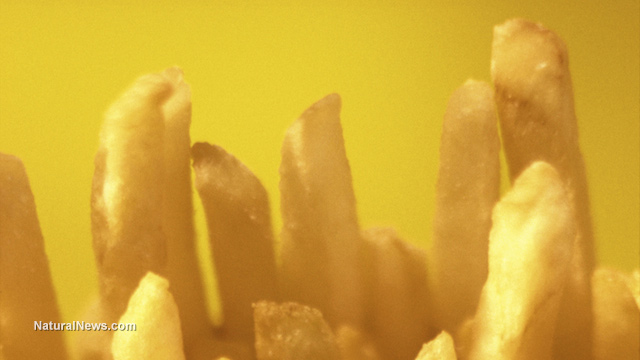 Do you really want to know what’s in your McDonald’s french fries? Grant Imahara of Myth Busters decided to find out.

Imahara went directly to the McDonald’s processing plant, where he thankfully learned that the the fast food chain’s much loved fries indeed contained spuds. The other ingredients, however, are quite worrisome, to say the least. Included in the list of 19 ingredients are dimethylpolysiloxane, a form of silicone found in Silly Putty, tertiary butylhydroquinone (TBHQ), a petrol-based chemical, and hydrogenated soybean oil, which is a manufactured form of trans fat.

According to “Food Babe” Vanni Hari, dimethylpolysiloxane is a chemical used in aquarium tank sealants, mold release agents and hair conditioners. In some cases, she explains, it even contains formaldehyde, a highly toxic chemical associated with brain damage, cancer, allergies and auto-immune disorders.

It’s also interesting to note that McDonald’s fries sold to U.S. customers are said to be worse than those made in Europe. Hari writes that, compared to the U.S., french fries in the UK are primarily made of a few basic ingredients such as potatoes, vegetable oil, and some sugar and salt.

“How can McDonald’s make french fries with such an uncomplicated list of ingredients all over Europe, but not over here?” she asked. “Why do McDonald’s french fries in the U.S. have to have an ‘anti-foaming’ agent? Do the [B]rits like extra foam? No, they don’t, Europe actually regulates this ingredient because they know this man-made chemical was never intended to be consumed by humans. This whole time [McDonald’s] has known about this and chooses to continue to serve [its U.S.] citizens silly putty.”

There’s also the issue of tertiary butylhydroquinone (TBHQ). While makers of TBHQ claim that it’s a type of phenol “used to stabilize foods, fats and vegetable oils against oxidative deterioration,” thereby extending their storage life, this ingredient is also found in everything from perfumes to biodiesel.

“It is also used as a corrosion inhibitor in biodiesel. In perfumery, it is used as a fixative to lower the evaporation rate and improve stability. It is also added to varnishes, lacquers, resins, and oil field additives. Both the European Food Safety Authority (EFSA) and the United States Food and Drug Administration (FDA) have evaluated TBHQ and determined that it is safe to consume at the concentration allowed in foods,” its manufacturers claim.

Finally, we have hydrogenated soybean oil, also referred to as the “silent killer.”

Like TBHQ, it’s also used in the food industry to prolong shelf life. However, according to a report by researchers at the Harvard School of Public Health and the Brigham and Women’s Hospital in Boston, at least 100,000 cardiac deaths that take place annually in the United States could have been prevented “if people replaced trans fat with healthier non hydrogenated polyunsaturated or monounsaturated oils.”

Now, after looking at all these ingredients, are you sure you still want McDonald’s fries with your meal?