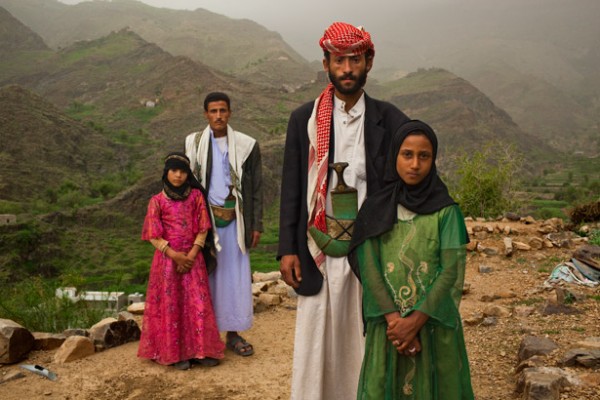 The United Nations, along with various world leaders, have often met to discuss an “issue” that no one on the planet has ever proven exists: man-caused “climate change.” In fact, the U.N. just sponsored a massive gathering in Paris, France, to highlight the supposed issue, where leaders like President Obama committed their countries to global carbon reduction goals that are both unnecessary and unrealistic, given the current depressed state of the world economy.

Clearly the U.N. – and Obama, and most other Left-wing leaders all over the world – care about this “climate change” issue. But aren’t there more important issues in the world that deserve their attention – issues that are not only appalling but also real?

You know – like the issue of middle-aged men marrying 12 year old girls?

Yes, that really happens. And what’s more, it happens a lot – so much so that entire organizations have formed to combat it.

As reported by the UK’s Mirror, so-called child marriages were highlighted in a video recently that has been viewed nearly two million times and has utterly shocked the civilized parts of the world. To highlight the problem, one group recently made a video in Lebanon – and many passersby who did not know it was a staged event voiced outrage.

The paper, on its web site, reported:

A little girl of 12-years-old, wearing make-up, poses for photographs as she appears to marry a middle-aged man in this shocking wedding video.

This horrifying footage also seems to show her suit-clad husband, who is at least four decades older than her, clinging on to her.

Shot in Lebanon, the video has sparked an international outcry.

Again, though, the supposed child bride and her groom were actors that had been hired by the activist group KAFA, which means “enough” in Arabic. The Mirror reported that a video of the fake wedding amassed in excess of 1.7 million views following its release. The video offers a glimpse into a world where thousands of young Lebanese, Syrian and other girls are forced into marriage, and often the groom is far, far older than his bride.

In fact, the report said, nearly 15 million girls – some as young as eight years old – have been forced to marry men that are sometimes in their 60s and 70s.

Indeed, the United Nations Population Fund says that more than 1.2 billion girls will be forced into child marriage by 2050.

‘The practice itself is shocking’

Since the release of the video, the Lebanese government has introduced legislation it hopes to pass that would require all marriages to be registered in an attempt to outlaw underage marriage. At present in the country, parents can give permission for their children to marry as young as nine; a girl herself can give consent on her own at age 14.

Activist Maya Ammar said the video was meant to be compelling.

“The scene [showing the child marriage] was supposed to seem shocking because the practice itself is shocking,” she said, the Mirror reported.

Some experts who study the issue say that it’s possible one-third of girls from low- to middle-income families are married before they turn 18 years old. And what’s more, a third of those are believed to be of an age less than 15.

When shooting the video, a number of passers-by expressed shock and outrage over the alleged marriage. Many were threatening the older “groom,” who would often tell those who complained that it was none of their business.

“The law allows this,” he says at one point. “Her parents gave permission.”

“What law?” responds a women whose face is blurred out. “Her parents are criminals. She’s 12. She’s like my daughter.

Girls as young as 12 can be married in Trinidad and Tobago, while in Syria the law permits 13-year-olds to be married.

So far, no global conference on finding ways to prevent child marriage has been sponsored by the U.N., however.