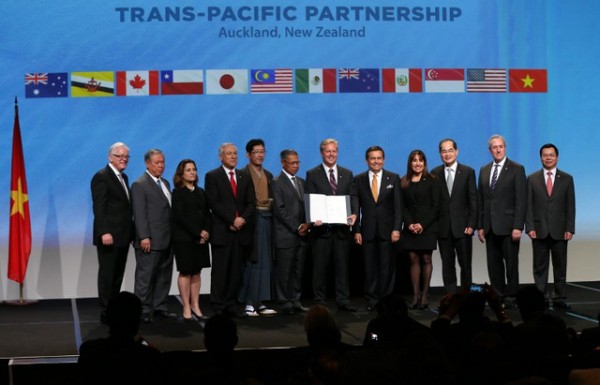 As Americans increasingly honed in on one of the biggest games in professional football, the Feb. 7 Super Bowl, and as much of the rest of the world focused on the spread of the Zika virus, several of the global elite made another trade deal that will enrich their masters while once again subjugating the rest of the planet to their table scraps.

As reported by the Los Angeles Times and other media, representatives from the U.S. and 11 other countries were meeting in Auckland, New Zealand, to sign the Trans-Pacific Partnership, a “trade” deal that has been negotiated in secret since President Obama took office, details of which were not permitted to be made available to the American public. Even their elected representatives could not say anything because they were sworn to secrecy in exchange for a peek at the deal.

“Michael Froman, President Obama’s chief trade negotiator, beamed as he walked onstage during a signing ceremony in New Zealand, but back home it is looking increasingly unlikely that a congressional vote on the deal will take place by summer. Major presidential candidates continue to pan the accord and even leaders of the GOP, the party of free traders, have shown only lukewarm support for what Obama has made his top economic priority in the second term.”

Not everyone is blindly agreeing

Thankfully, however, there are some in Congress who aren’t all a-gaga over the agreement.

“I have some problems with the agreement,” Senate Majority Leader Mitch McConnell, R-Kentucky, told reporters recently, repeating statements he has made since the text of the agreement was finally released in November. “With both the Democratic candidates for president opposed to the deal and a number of presidential candidates in our party opposed to the deal, it is my advice that we not pursue that, certainly before the election.

“And some would argue that it’s not fair to the voters for them not to consider what you might do after the election,” he continued.

The TPP, which was wrapped up in October in Atlanta, would become the largest regional trading agreement in the world. It enjoins the economies that comprise almost two-fifths of the world’s annual economic output and would eliminate tariffs and duties on thousands of goods while establishing uniform rules on labor rights, the environment, intellectual property and other issues that affect international trade and investment.

It will affect employment

This far only Malaysia, which has an unemployment rate of just 3 percent, has signed the agreement. Governments in Mexico and Australia say it may be the end of the year before their respective legislative bodies finish debate and schedule TPP for a vote. The other participating nations are Brunei, Canada, Chile, Japan, Peru, Singapore, Vietnam and New Zealand, the Times said.

Many nations are likely to wait to see what the United States does first.

The agreement has been analyzed by a number of think tanks, including the Free Thought Project, which believes that America’s future is being sold to corporate elites. Which states:

Among the contents, some of which had been revealed in pieces by Wikileaks thanks to concerned whistleblowers, is the notorious Intellectual Property chapter. This chapter acts as a vice grip on copyright law as well as guidelines for so-called ‘corporate tribunals,’ which will allow ‘injured’ corporations to sue governments (even local governments) for predicted future losses,” the analysis said. “Internet service providers (ISPs) would be forced to cough up customers’ names over instances of copyright infringement for the purposes of prosecution.

Many experts who have analyzed the text predict an end to such personal freedoms as knowing which country grew your produce — and whether or not it’s been genetically modified or even doused with toxic chemicals. Labor rights, environmental guidelines, investment rules — virtually every facet of everyday life is covered by this (corporate) trade ‘deal.’

Obama and other leaders involved in the deal say it will create as many as 650,000 new jobs (like NAFTA in the early 1990s was supposed to do but which really cost American jobs), however a study by Tufts University found just the opposite: “TPP would lead to employment losses in all countries, with a total of 771,000 lost jobs. The United States would be the hardest hit, with a loss of 448,000 jobs.”

Once again, America’s labor force gets the brunt of it – but maybe not, if Donald Trump becomes president.

“It’s going to allow countries to continue to take advantage of us and take our jobs, take our trade,” he told Breitbart News.

“It’s bad for us,” he continued. “It’ll allow China to come in through the back door at a later date and continue to really do a number on us, and it doesn’t take into account money manipulation—manipulation or devaluation of currency, which is the single biggest tool that countries use against us. It’s a terrible deal.”