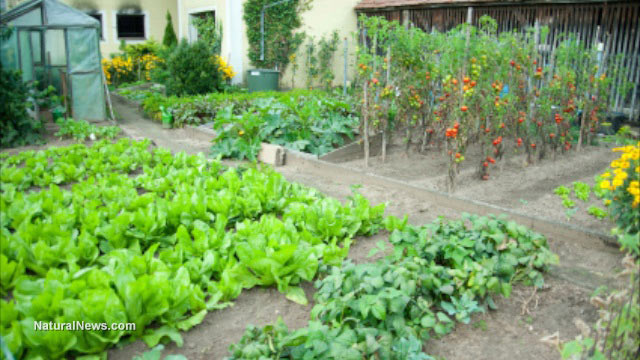 Denise Morrison from Tulsa, Oklahoma, has become the perfect example of a citizen victimized by government terrorism. According to Morrison, Tulsa code enforcement officials went to her house and illegally tore up her edible garden containing over 100 varieties of medicinal plants. Despite the fact that she was in full compliance with local laws on gardening, city officials still proceeded to illegally destroy her garden — a blatant violation of a court order and her inherent right to grow food on her own property.

The heartbreaking story, reported by KOTV, has disturbingly become a common occurrence in America nowadays. Complaints are often filed against overzealous city officials who conduct witch hunts that include coercing victims to comply with their unlawful demands. When victims refuse or try to fight back and reclaim their legal rights, the city proceeds to trespass on and destroy their property — which was exactly what happened to Ms. Morrison when a “neighbor” complained about her edible garden.

Morrison insists that she uses her garden’s produce to naturally treat her diabetes, high blood pressure and arthritis. Each one of Morrison’s plants — a collection of strawberries, stevia, several varieties of mint, apple trees, pecan trees, walnut trees, grapes, lemons, garlic and chives, to name just a few — had a specific purpose, may it be for nourishment or as a natural medicinal treatment for various health conditions.

City of Tulsa code enforcement officials, apparently having their own sick delusions of perceived grandeur, independently decided that Morrison’s garden violated the local code, even though it most clearly did not. In fact, nowhere in the local code is there even a hint suggesting that Morrison’s garden was in violation of any local law whatsoever — Tulsa city officials appear to have simply made up violations in order to zero in on her.

Denise’s garden is in full compliance with the law

Code enforcement officials claimed that Morrison’s plants were too tall, exceeding the 12-inch limit for plants, and thus had to be removed. However, in the Tulsa’s Code of Ordinances titled Nuisances Classified, plants exceedingly 12 inches in height are permitted, as long as they are “healthy trees, shrubs or produce for human consumption grown in a tended and cultivated garden.”

Morrison tried to point this fact out to officials, but they ignored her. Every time she tried to defend the legitimacy of her garden by setting up meetings to discuss the matter, they repeatedly refused, and ordered her to remove the garden or else face further penalties.

Morrison, however, the strong woman that she is, was not about to be put down without a fight. She decided to call the police in order to resolve the issue in court. However, before the hearing could even take place, code enforcement officials, in violation of both the court order and the city’s own laws, arrived at Denise’s house and proceeded to forcefully remove every single plant from both her front and backyards.

“Not only are the plants my livelihood, they’re my food and I was unemployed at the time and had no food left, no medicine left, and I didn’t have insurance,” Morrison lamented. “They basically took away my life and my livelihood.”

Americans need to stand up against government terrorists

Morrison has since filed a civil rights lawsuit against the city for tyrannizing her and destroying her personal property. Some of her supporters have also set up a Change.org petition demanding that the City of Tulsa replant her garden, compensate her for all losses, and apologize to her for their illegal activities.

The incident, however, should not have even occurred in the first place; nor should it have happened to Kimberly Bois of New Hampshire, Len Gratto of Mission, British Columbia, or Karl Tricamo of Ferguson, Missouri.

The City of Tulsa’s Neighborhood Inspections division, which was responsible for the destruction of Morrison’s property, can be reached at (918) 596-7698.