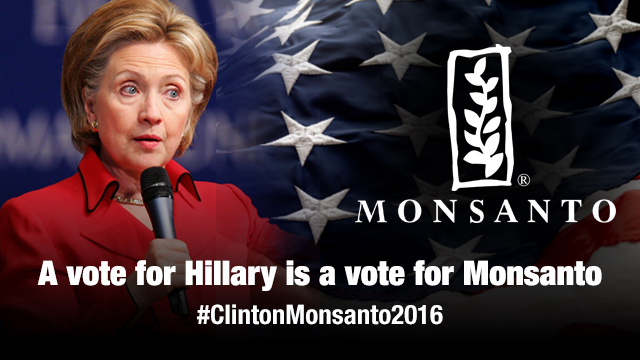 Hillary Rodham Clinton’s connection to Monsanto is an open secret apparently not a lot of her supporters are aware of. Democrats brainwashed to vote blindly for Clinton are now shocked to learn that her ties to Monsanto run so deep that she’s been dubbed the “Bride of Frankenfood.”

“Hillary Rodham Clinton’s ties to agribusiness giant Monsanto, and her advocacy for the industry’s genetically modified crops, have environmentalists in Iowa calling her ‘Bride of Frankenfood,'” reported The Washington Times.

“A large faction of women voiced strong support for Mrs. Clinton’s candidacy until the GMO issue came up, prompting them to switch allegiances to Sen. Bernard Sanders of Vermont, a liberal stalwart challenging her for the Democratic nomination,” the Times report read.

If you look at this table of Clinton Family Foundation donors, you’ll see that both that the Bill & Melinda Gates Foundation and Monsanto are two of the biggest donors to the Clinton “Crime” Family Foundation. Other big donors include Pfizer, ExxonMobil, Dow Chemical, Goldman Sachs, Procter & Gamble and Coca-Cola. It’s as if we’re looking at a compilation of the world’s most powerful and most evil corporations, aren’t we?

If the list is not enough to convince you of Clinton’s ties to Monsanto, then you’re in for a treat. True Activist reports:

“Hillary Clinton recently announced that she will be appointing long-time Monsanto lobbyist Jerry Crawford as adviser to her ‘Ready for Hillary’ super PAC. Crawford has mostly worked with Democratic politicians in the past, but has also put his support behind Republican candidates as well. Anyone who was willing to support Monsanto’s goals would receive support from Crawford. … Over the years, Crawford has been instrumental in fighting against small farmers in court and protecting Monsanto’s seed monopoly.”

To add to the Hillary–Monsanto connection, what most people don’t know is that, back in the 1990s, during Clinton’s early days as an Arkansas lawyer, her firm, Rose Law Firm, counted Monsanto and several agribusiness leaders as some of its most prized clients.

Though almost everyone has already forgotten of Clinton’s past scandals (the Whitewater scandal and the fact that she waged a media war on all the women who tried to expose Bill Clinton’s sexual harassment are just two examples), the fact remains that she’s a puppet of Monsanto and all its toxic practices — no amount of political propaganda or charismatic speeches could change that.

To learn more about the “Bride of Frankenfood’s” hidden ties, read the Health Ranger’s eye-opening article on NaturalNews.com.