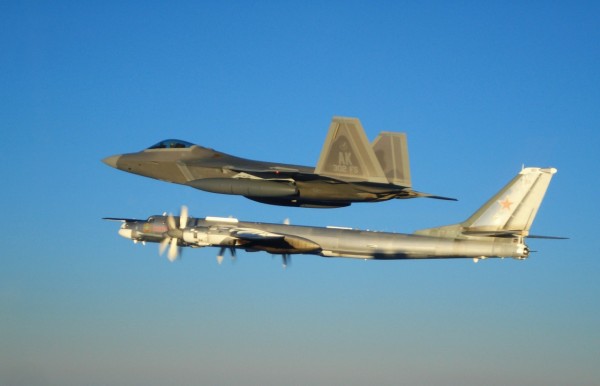 It appears that Russian President Vladimir Putin really does long for the bad ol’ days of the Cold War, given his resumption of tactics, that made for plenty of tensions in the days when the world feared a nuclear World War III.

The most recent provocative incident came in late January, when a Russian Su-27 fighter jet passed within 20 feet of an American RC-135 reconnaissance aircraft, as it transited international airspace over the Black Sea, the Washington Free Beacon reported.

“On Jan. 25 an RC-135 aircraft flying a routine route in international airspace over the Black Sea was intercepted by a Russian Su-27 in an unsafe and unprofessional manner,” Navy Capt. Daniel Hernandez, chief spokesman for the U.S. European Command, told the Washington Free Beacon. “We are looking into the issue.”

U.S. defense officials said the Su-27 flew parallel to the reconnaissance jet, a militarized version of the Boeing 707, and performed what they described as a very aggressive banking turn away from the U.S. plane.

The jet thrust from the Russian fighter “disturbed the controllability” of the RC-135, according to one official familiar with the incident.

The WFB cited a second defense official, who said the American plane was in airspace some 30 miles from any coastline, well within international space, and far away from any Russian territory when the encounter took place.

Since the incident, the Pentagon has announced that it had finished a flight safety memo with the Russian government, following a video teleconference with Russian counterparts. Issues that were discussed included air safety over Syria, in addition to “the means to avoid accidents and unintended confrontation between coalition and Russian forces whenever the two sides operate in close proximity,” which the new site quoted Pentagon spokesman Peter Cook saying in a statement.

This latest incident is just the most recent in a chain of similar encounters initiated by Russian aircrafts in recent months, incidents which appear to be getting increasingly more aggressive, and which have been designed to coerce or harass U.S. military planes and warships in Europe, Asia and North America.

In one mocking incident, as reported by Fox News, U.S. jets intercepted Russian Tu-95 bombers as they approached the Alaska and California coastlines on July 4 of last year – Independence Day. U.S. officials stressed that at no time did the Russian planes violate the 12-mile zone of U.S. airspace (President Obama had a telephone conversation on the same day with Putin, the WFB reported). The news network reported that a similar episode took place on July 4, 2013.

Russian aircrafts are also provoking other nations. The WFB noted that Japan’s Defense Ministry revealed days after the Black Sea incident that Japanese interceptors were scrambled to chase away a pair of Russian Tu-95 Bear bombers (which can carry nuclear cruise missiles), that approached northern Japan and flew just outside Tokyo’s airspace, in what analysts said was unusually close.

Other incidents included a similar near-collision between a Russian fighter and RC-135, a militarized Boeing 707, over the Black Sea on May 30. Around the same time, a Russian Su-24 jet buzzed the destroyer USS Ross in the Black Sea near occupied Crimea.

The intercept of the RC-135 took place about the same time as the Russian fighter buzzed the USS Ross in the Black Sea, near Russian-occupied Crimea.

Two Russian Tu-142 jet-powered bombers made some low passes in October, near the USS Ronald Reagan aircraft carrier, as it navigated in the Sea of Japan near the Korean peninsula, resulting in the carrier scrambling F/A-18 jets to intercept the bombers.

“Much of what Russia is doing today is aimed at generating fear of Russian military power and the possibility of war,” former Russia expert at the Pentagon, Mark Schneider, told the Free Beacon.