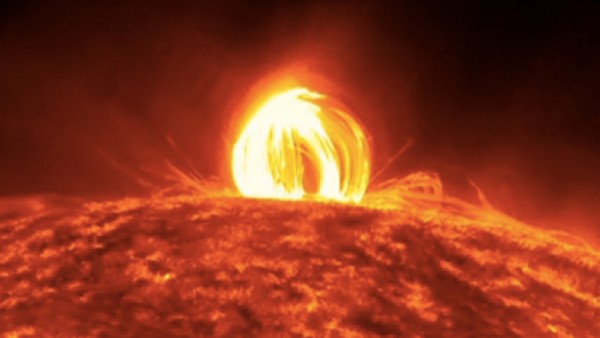 The sun has a temper tantrum from time to time. Every solar climax, the sun unleashes a wave of solar flares, sunspots and coronal mass ejections. Most of these disturbances go unnoticed on Earth. The atmosphere serves as a shield from the solar storms.

This doesn’t mean Earth is out of the woods, however. Solar storms harbor the potential to bring the power grid and communication technologies to a grinding halt. It’s not a question of if a massive solar flare will disrupt the backbone of the economy, but when.

The most violent solar storms are known as coronal mass ejections (CMEs). The sun launches a plasma pie of negative and positive charged particles hurdling into space. CMEs that penetrate Earth’s atmosphere can cause a distortion in the magnetic field, disrupting satellites, communication systems and power grids.

A history of solar storms

The most widely known solar storm by name was the Carrington Event in 1859. The solar storm destroyed telegraph machines and produced auroras that could be seen all the way in Hawaii, Cuba and Africa.

Another solar storm occurred in the 20th century, which sheds light on the devastating impact a CME can have on a technologically dependent society. In May of 1921, astronomers noticed a giant sunspot estimated to have a width of 94,000 miles and a length of 21,000 miles. Auroroas could be seen for several evenings over Europe and the Eastern United States.

Most of the East Coast was subject to a blackout in communication in wake of the solar storm. The signal and switching system for the the New York Central Railroad were completely shut down because of the event. A fire took hold of 57th Street and Park Avenue because of the incident as well. A telegraph operator stated that his switchboard burst in flames, which caused the entire building to become engulfed by fire. A comparable fire was reported from a telephone station in Sweden that morning too. The solar storm impacted telephone, telegraph and cable traffic throughout Europe.

The scare of flares

Although the technology of 1921 isn’t like today’s technology, the incident gives a glimpse of the impact a large enough solar storm could have on contemporary society. If a solar storm like the one of 1921 occurred today, the reverberations would be absolutely devastating. Unlike the economy of 1921, the backbone of the economy today is digital. People would be unable to send emails, pay bills, purchase food or pump gas.

Both American and European scientists agree that a strong enough CME could destroy a range of electrics and communication technologies. If electricity were to stop working, so too would the financial infrastructure and food delivery systems.

In fact, according to Peter Vincent Pry, Executive Director of the Task Force on National and Homeland Security, if the U.S. power grid were to go offline, approximately 90 percent of the population would die. More than $30 billion would be lost in salaries, perished goods, closed businesses and other problems caused by the storm.

The consensus among experts is that Earth would only have a 24 hour notice before a solar storm crashed into the planet. Individuals would be well advised to stock up on food, water, batteries, physical cash and other basic necessities.

The strongest space storm in recent memory plunged six million people into darkness in Quebec, Canada, in 1989. Scientists report that a more active period for solar storms is on the horizon. Meanwhile, power companies are trying to install mechanisms to help protect the grid from solar threats.