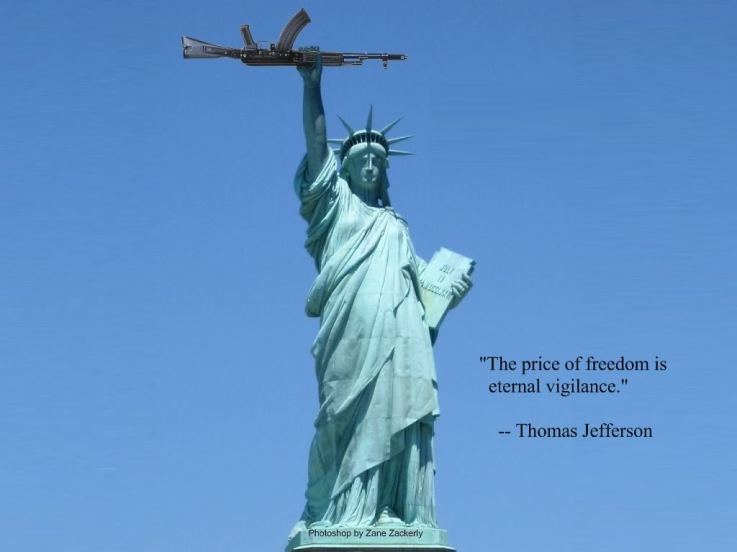 Attacks on the Second Amendment are increasing in intensity, and the right to keep and bear arms is literally, hanging on a thread.  The left despises gun ownership and their arguments for gun control essentially explain their morality. For instance, Coppin State University teacher, D. Watkins, believes that gun owners should have to take a bullet in order to purchase a gun. This ridiculous statement demonstrates that liberals aren’t really anti gun; rather, they hate conservatives who own them. He claims that if this rule would be implemented mass shootings would decrease. This is a perfect example of the backwards thinking of the left.  As much as he claims to hate guns, in a sick, twisted way he is also acknowledging the argument we conservatives make. He is admitting that it takes a gun to stop a gun, only in this case, he claims to be the good guy. Another professor, Adam Winkler  (@adamwinkler) of UCLA School of law, recently wrote that the secret weapon the left has against gun ownership is the mass immigration taking place in the United States. He gleefully writes that as soon as the white majority is gone, the Second Amendment will be as well. This is typical left wing thinking as he is probably a proponent of the “white privilege” ideology.  Winkler is an alleged constitutional law professor specializing in subjects like gun control, incidentally. To argue that the end of the white man and the changing demographics in America will end the Second Amendment is akin to having a death wish because even the FBI admits that ISIS is recruiting in the United States.

Liberals fail to see the hypocrisy and immorality of their gun control arguments because they do not view mankind the way conservatives do. Conservatives generally hold a Judeo Christian view, as we bitterly cling to our guns. Most liberals on the other hand, adhere to a humanist worldview, which places men at the center of the universe and claims that man is over all, good without God. They don’t really believe this because if they did, they would not believe man to be incapable of the type of responsibility required for gun ownership. Their true belief rests in the idea that men need to be controlled from cradle to grave because we are not capable of making our own decisions. Conservatives on the other hand, believe that all people are capable of self governance and taking responsibility for their actions, even though our religion teaches we are all sinners. This is why we blame the individual for mass shootings and liberals blame the gun, to them, we are incapable of assuming responsibility.

The left always acts on emotion, and in many ways, our school systems are training our children to react emotionally to crisis situations; thus training them to be future gun control advocates. Many of our high school text books are taking the liberty of rewriting the Second Amendment , thus, training our children to believe that only government should decide who owns guns.  They fail to remember that it was government that was responsible for the mass murder of over 100,000,000 people throughout the twentieth century; mass murder that was committed after gun confiscation incidentally.

The immorality and selfishness in arguing for gun control is unconscionable as the left never considers the potential cost in human life that could come with gun confiscation.  To suggest that police and/or soldiers be responsible for going door to door to confiscate weapons not only demonstrates a selfish, irrational fear; it also demonstrates an inability to take personal responsibility. They believe that it is the role of police to keep people safe; however, this is not the case. According to the Supreme Court, individuals are responsible for their own personal protection. In June of 2005, the Supreme Court ruled that police do not have a constitutional obligation to put themselves in harm’s way to protect another human being. Personal safety is the personal responsibility of the individual, and to expect others to put themselves in harm’s way, because of an irrational fear of firearms, is incredibly selfish.

Members of the military and police officers swear an oath to uphold the Constitution of the United States. Asking people to break that oath and do something that goes against their will is an immoral act; especially considering the fact that in many cases they will be moving against families that may share the same beliefs as their own. Face it; there are nearly ninety million gun owners, if not more. In a nation of 320,000,000, that’s nearly one in every 4 Americans. This means that we are all likely related to someone who supports the Second Amendment, and asking police and military to confiscate weapons is like asking them to turn against their own families. That is what Adolph Hitler, Mao Tse –Tung, Joseph Stalin and other totalitarian dictators did to get society to turn against itself.

We all know that gun control isn’t about keeping society safe, it’s about control. The left acts as if they are on a moral high ground by calling for stricter gun laws; however, considering the fact that all mass shootings happen in places where law abiding citizens, people who should otherwise have the right to protect themselves, have been disarmed, (the gun free zone) their argument lacks a moral base because it actually causes more death. In this article the hypocrisy of the lefts moral argument was exposed as was the fact that personal safety is the responsibility of the individual. To strip that responsibility and expect someone else to assume it is the highest level of immorality and hypocrisy. Can you think of any leftist agenda that is moral?