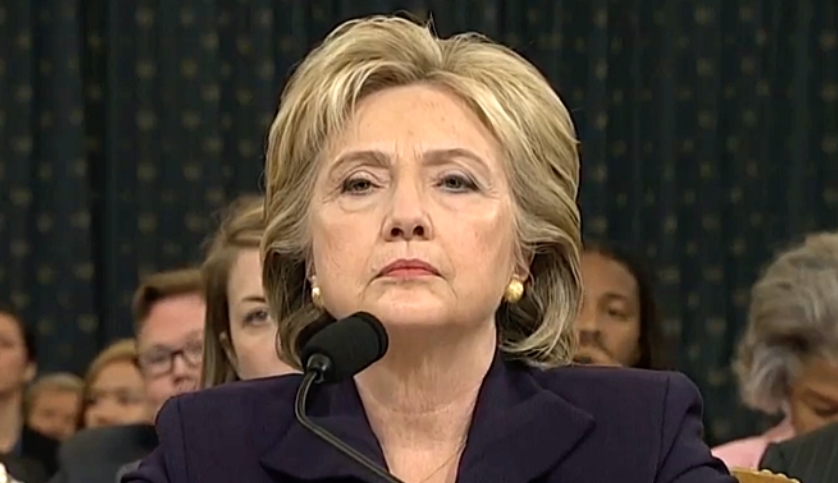 On the same day, at two separate campaign events, Hillary Clinton was caught on tape trying to convince voters that she isn’t Satan.

The NY Post caught her using the new campaign approach in Nebraska. “First thing you can tell them, as best as you can tell looking [at me] under the lights: I don’t have horns,” Clinton said.

In another video, she was captured saying basically the same thing, trying to prove she doesn’t have horns – that’s she’s not Satan.

As her humor falls flat, it’s almost as if she’s making some sort of arrogant confession. …

While she was Secretary of State from 2009–2013, Hillary R. Clinton was no angel, even though some worship her as a god. The reality is, she was a world arms dealer when she was in power. Using taxpayer money, she put weapons of war in the hands of the most dangerously motivated terror groups in the Middle East. In all, she was responsible for approving $165 billion worth of commercial arms sales to 20 nations. The governments of these 20 nations (where the American flag is often burned), had given $millions to the Clinton Foundation.

So, while Hillary Clinton traverses the U.S., calling to reduce gun violence, one should wonder what her true motives are, based on her record of arming violent groups and running her own wars in the Middle East to expedite regime change. The blow back of her arms deals was felt in Benghazi, when terror groups murdered U.S. ambassador Stevens.

Suspiciously, she supports mandatory gun buy-back programs to confiscate guns from Americans, which is ironic, since she used $165 million taxpayer dollars to arm violent groups in the Middle East, all the while raking in millions in kickbacks from the governments of these countries to fund her “philanthropic” Clinton Foundation.

As International Business Times reports, “The State Department formally approved these arms sales even as many of the deals enhanced the military power of countries ruled by authoritarian regimes whose human rights abuses had been criticized by the department. Algeria, Saudi Arabia, Kuwait, the United Arab Emirates, Oman and Qatar all donated to the Clinton Foundation and also gained State Department clearance to buy caches of American-made weapons even as the department singled them out for a range of alleged ills, from corruption to restrictions on civil liberties to violent crackdowns against political opponents.”

Taking taxpayer dollars to run guns to the Middle East isn’t the only way Hillary raises money for her foundation and campaign for power. She also accepted a $20 million endorsement from Planned Parenthood, an organization that should be funding women’s reproductive health, as they advertise. Instead, the anti-choice Planned Parenthood takes $20 million from taxpayers to send to Hillary in hopes of getting her elected. After all, Clinton is their number one spokesperson, advocating for increased Planned Parenthood taxpayer funding!

If Planned Parenthood was truly an unbiased, pro-choice, women’s healthcare organization, then women would have the option to give birth there, and not just be coerced into life terminating surgeries. If they were pro-choice, Planned Parenthood would also be providing some of the best maternity care in the country, supplying whole food nutrition, birthing options, and fetal monitoring services to assist women who want to have healthy births. Instead, the organization would rather spend $20 million of taxpayer dollars on getting Clinton elected. How pathetic.

What’s also pathetic, is that there are droves of voters who are waiting to vote for Hillary Clinton just because she is a woman. Some voters are so shallow that they would vote for someone based on their gender alone. How sad. Why not look at a candidate’s corrupt, unethical record? Why not address her sociopathic behavior, her disturbing behavioral patterns, the horrendous state of her emotional health, and deluded decision-making processes?