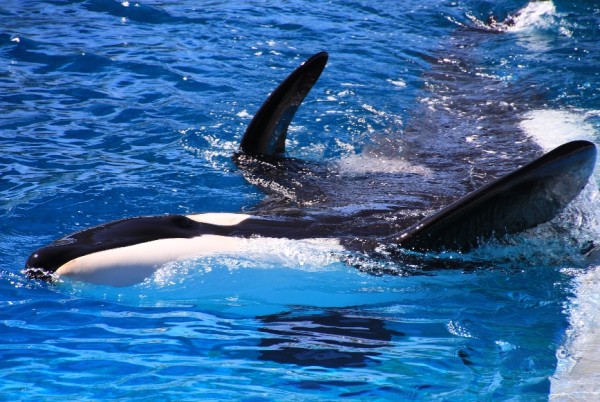 Corporations routinely employ undercover agents in an effort to protect their empires; however, instances such as these rarely make the news. But in an unprecedented revelation, SeaWorld, formerly owned by Anheuser-Busch, has been caught utilizing spies in an attempt to self-destruct animal rights groups challenging the entertainment park’s policies regarding their treatment of marine life.

SeaWorld has been fighting an uphill battle ever since the release of Blackfish, a heart-wrenching documentary film exposing the controversy of capturing killer whales and placing them on display for entertainment, an unnatural practice known to drive the animals into depression, and greatly shortening their life span.

People for the Ethical Treatment of Animals (PETA) got involved in the cause to boycott SeaWorld, calling for an end to its infamous Killer Whale shows. Desperate to recover from the bad press that ensued following Blackfish, SeaWorld enlisted some of its own employees to infiltrate animal rights groups and instructed them to incite violence against the park. Thomas Jones makes statements on Twitter:

#Blackfish is going to put #SeaWorld out of business. If they don’t the protester will just burn it to the ground.

Who wants to come with me in 2018 to drain the new tanks at #seaworld before they put the whales in them. if you build them I can drain them

According to the Orlando Sentinel, SeaWorld admitted that several of its employees pretended to be animal-welfare activists in order to spy on their critics.

“The animal-welfare group [PETA], which has waged an intense campaign against SeaWorld, went public with evidence that a San Diego employee attended protests and made incendiary comments on social media while posing as an activist. The employee, who was placed on administrative leave, has returned to work at SeaWorld,” states the Orlando Sentinel. 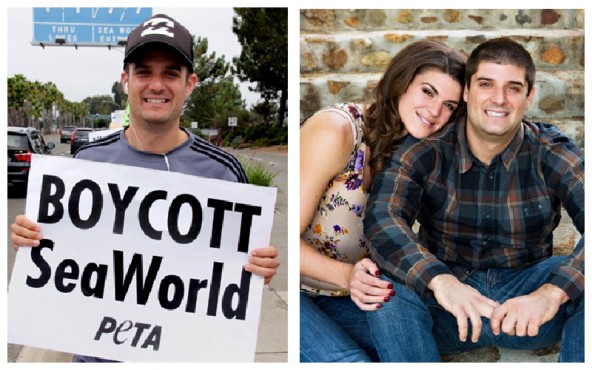 “Thomas Jones” on the left, Paul McComb on the right.

The person they’re referring to is Paul T. McComb, a human resources employee at SeaWorld San Diego who operated under the pseudo name “Thomas Jones,” according to PETA’s blog.

“‘Jones’ joined PETA’s Action Team using a P.O. Box in San Diego that we discovered was registered to Ric Marcelino, the director of security for SeaWorld San Diego. He constantly ‘fished’ for information from PETA staffers about protests against SeaWorld, and even joined PETA supporters in a protest of SeaWorld’s float in the 2014 Rose Parade.

SeaWorld says it’s through using spies, but is it really? 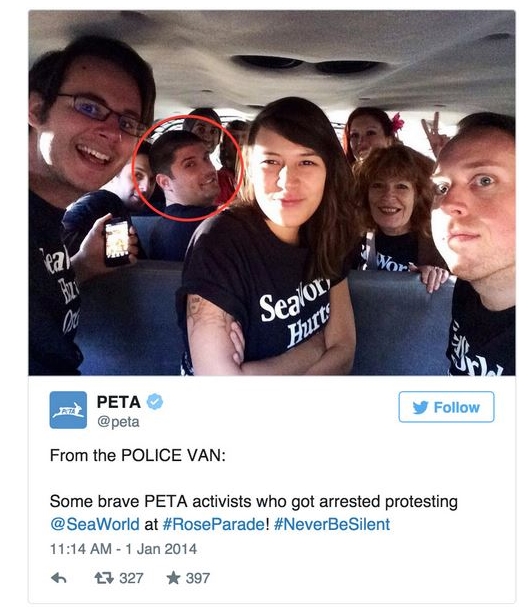 Circled in red is the SeaWorld spy

PETA says ‘Jones’ began his involvement with them three years ago, attending and organizing meetings in attempt to earn the trust of animal rights activists. On numerous occasions, he posted remarks on social media trying to incite violence against SeaWorld, calling for its tanks to be drained and for it to be burned to the ground.

In one instance, ‘Jones’ encouraged activists to “get a little aggressive,” take “direct action” and to “grab pitchforks and torches,” reports PETA, adding that he told them to “blow horns outside the SeaWorld CEO’s house at night.”

‘Jones’ also reportedly set up his own “direct action” protest, describing the experience as being “more exciting than just holding signs.” But he himself did not attend.

The plant has since returned to his position at SeaWorld, according to the Orlando Sentinel. But the park says it’s retiring its practice of inserting spies into activist movements.

SeaWorld staff said it has “directed management to end the practice in which certain employees posed as animal-welfare activists. This activity was undertaken in connection with efforts to maintain the safety and security of employees, customers and animals in the face of credible threats.”

SeaWorld’s admission to using spies is predicted to further complicate matters in terms of making a comeback from the damage caused by Blackfish.

“Past scandals have resulted in short-term hits to the reputation and economic success of companies,” said Kirk O. Hanson, Executive Director of the Markkula Center for Applied Ethics at Santa Clara University. “I would expect the reaction to this incident to be similar. Unfortunately the incident contributes long-term to a cynicism about the ethics of business in general,” he added.