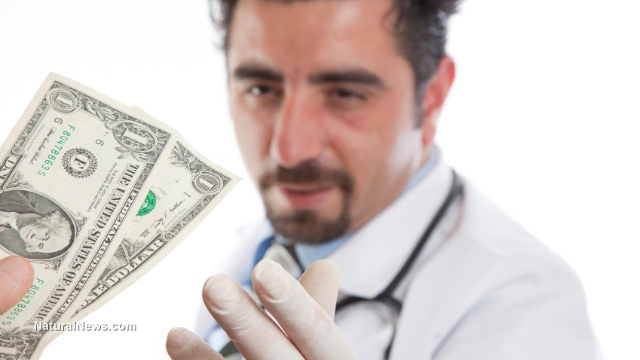 If you’re searching for con artists, scammers, hucksters and quacks, look no further than your nearby local hospital. While, of course, there are doctors out there whose goal is to really help patients out, there are also those whose main intention is to force people to receive “treatments,” harmful side effects notwithstanding, just for the sake of money.

Case in point: The U.S. Department of Justice’s prosecution of Dr. Fata, who was arrested and charged with 12 counts of “healthcare fraud” and another count of “conspiracy to pay and receive kickbacks.”

Dr. Fata was a prominent cancer doctor in Michigan who admitted to intentionally and wrongfully diagnosing healthy people with cancer, just for the sake of profit. A PreventDisease.com article goes on to report:

“It is my choice,” Fata said on Tuesday of his surprise guilty plea, which included rattling off the names of numerous drugs he prescribed for his patients over the years. In each admission, he uttered these words: “I knew that it was medically unnecessary.”

Fata was charged with running a $35-million Medicare fraud scheme that involved billing the government for medically unnecessary oncology and hematology treatments. The government says Fata ran the scheme from 2009 to the present, through his medical businesses, including Michigan Hematology Oncology Centers, with offices in Clarkston, Bloomfield Hills, Lapeer, Sterling Heights, Troy and Oak Park.

According to the government, Fata had a patient load of 1,200 people and received $62 million from Medicare; he billed for more than $150 million.

Dr. Fata used highly unethical tactics to fool patients into agreeing to expensive chemotherapy they don’t even need, all for the sake of raking in profits — while his patients went home with permanently damaged livers, kidneys and brains.

Dr. Fata, obviously, isn’t the only doctor who’s used underhanded tactics to gain more profit. Mike Adams, the Health Ranger, shares the story of a woman who had a small cancer tumor removed from her breast and was told all the other surrounding tissues (including lymph nodes) tested negative for cancer.

However, for weeks after the surgery, her hospital’s oncologist continued to hound her, demanding to see her for a “treatment plan” that would involve exposing her to toxic chemotherapy chemicals while billing her insurance for hundreds of thousands of dollars.

When she mentioned all other surrounding tissues were cancer-free, and that there couldn’t possibly be a reason why she should undergo chemotherapy, she was told that chemotherapy works as a “preventive” measure against cancer.

The idea that chemotherapy is some sort of nutrient that “prevents” cancer is nothing more than a preposterous claim, propagated by the very oncologists who profit from selling unknowing patients toxic treatments. Unscrupulous doctors disguise their for-profit sales pitches as “medical consultations,” with tactics which involve telling patients: “You won’t be alive in six months unless you agree to this treatment.”

To call these people “doctors,” and to call their consultations “medical treatments,” is an insult to human dignity. When either you or any of your loved ones happen to encounter such individuals, be wise enough to know what’s good for your health.

Don’t let their tactics fool you.