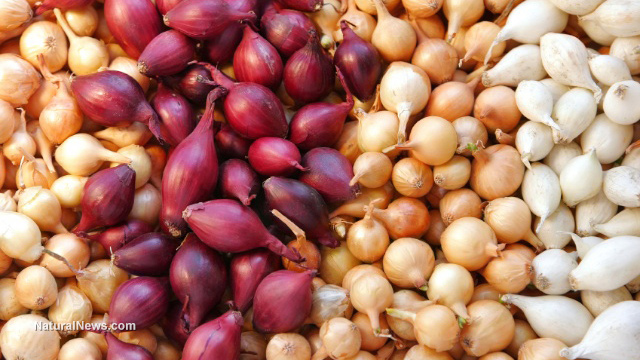 Researchers have just determined that flavonoids extracted from common onions slow the rate of colon cancer growth in mice just as effectively as chemotherapy. Moreover, while the LDL cholesterol of the mice subjects on chemo went up, the LDL levels of mice on onion extract actually dropped.

In this study, researchers fed three groups of test subjects doses of flavonoids extracted from onion, oral chemo drugs or saline (as control), along with a high-fat diet. The fatty diet was used to induce high blood fats and cholesterol (hyperlipidemia), a major risk factor for colon cancer. After three weeks, the growth of colon tumors in those fed with onion extract slowed by 67% compared to the controls. Although the tumor growth of mice under chemo drugs slowed a little bit more than those fed with onion extracts, there really was no statistically significant difference between the two. The notable difference, however, lies in the side effects experienced by the mice.

Subjects treated with onion extracts experienced no negative side effects

Chemo drugs are known to carry over 100 possible side effects, including coma, temporary blindness, loss of ability to speak, convulsions, paralysis and collapse. It is also known that chemo drugs may induce hyperlipidemia (high cholesterol and/or triglycerides) in humans. In this case, the mice subjects under chemo treatment experienced just that. Their LDL cholesterol levels went up significantly; notably, however, those who were treated with onion extracts experienced nothing of that sort.

More impressively, the mice getting onion extract had total cholesterol and apolipoprotein B levels that were markedly lower (as much as 60% lower for each) than controls on the high-fat diet. Onions are known to have the ability to decrease blood fats, and in a recent placebo-controlled clinical trial, onion skin extract was shown to significantly lower total cholesterol, LDL cholesterol and the atherogenic index in healthy young women after just two weeks. But how much onion do we need for a beneficial effect against cancer? Unfortunately, the authors of the mice study did not disclose what quantity of extract was used.

Garlic, leeks, chives, shallots, onions and scallions are all Allium vegetables. Previous studies have shown that these vegetables protect against multiple cancers; however, onions often emerge as the most effective one, simply because we eat more of them. Fortunately, a recent study from Switzerland and Italy has shed light on just how much we need. Eating up to seven portions of onion per week had mostly minimal effects. However, eating more than seven portions weekly were shown to have the following remarkable risk reductions for cancers: