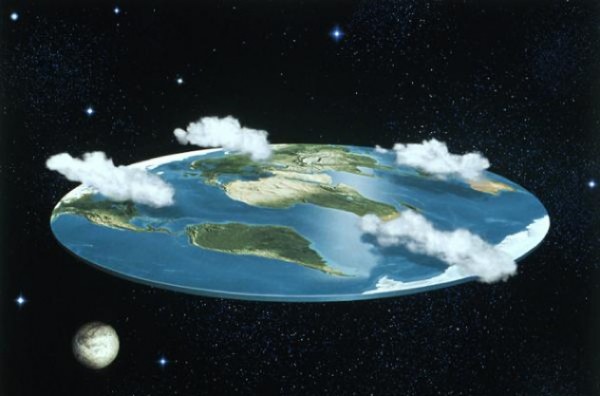 The rapper B.o.B. declared on Twitter last month that Earth is flat, claiming to have pictures to back up his outlandish claims. The incident provoked responses from high profile scientists like Neil deGrasse Tyson, who noted such statements made by a public figure are responsible for a strain of anti-intellectualism plaguing the nation.

The moon is not made of cheese and the world is not flat. This can be observed during a lunar eclipse, which occurs whenever the Earth’s orbit places it in-between the sun and moon. The Earth casts a round shadow on the moon. Since the Earth is rotating and consistently casting a round shadow on the moon during every eclipse, its proves beyond a shadow (forgive the pun) of a doubt that the Earth is in fact round.

Ships on the horizon

Anyone who has ever waited for a ship to dock will notice that a ship does not sporadically appear off the horizon but gradually emerges from beneath the ocean. The reason ships do not emerge from the ocean – nor fall off the edge of Earth – is because the planet is round. The fact that ships appear to emerge from the depths of the sea is an illusion cast by Earth’s curvature.

If you place a stick upright, it will cast a shadow. The length of the shadow changes throughout the day. If the world was flat, then two sticks at different places should produce the same shadows. The problem is they don’t, which only makes sense if the Earth is round. In fact, Eratosthenes took note of this phenomena to calculate the circumference of the Earth nearly 2,200 years ago.

The curvature of the Earth

If the Earth were flat, then we all would stand on an equal playing field. The problem, as anyone who has ever stood atop of a hill knows, is that the higher elevated you are, the more you can see. At certain heights, you can actually see the curvature of the Earth. This makes complete sense if the Earth is round and absolutely no sense if the Earth is flat.

Different time zones exist because the world is an orbiting globe. When the sun shines on a spot of land, the other side is darkened (and vise versa). This creates time differences. If Earth was flat, the sun would shine on everyone at the same time.

The law of gravity

Flat Earth theory is based upon an outdated understanding of gravity. Conventional understandings of gravity are incompatible with Flat Earth theory, because they require a spherical mass pulling all objects towards its center. Flat-Earthers propos that a disk-shaped Earth is accelerating “upward,” which gives the illusion of gravity. Of course, no explanation is given why or how the Earth is accelerating upwards.

As the noted list has shown, not only are Flat-Earthers misinformed – they’re square. Anyone who doubts the existence of gravity is invited to jump out of a three story building.