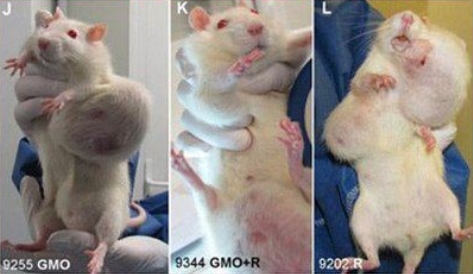 Russia’s consumer protection group, Rospotrebnadzor, said the country has banned all imports of genetically modified (GM) corn, following the results of a French study showing massive tumors in rats after having been fed Monsanto’s GM corn.

Monsanto, on the other hand, continues to insist that its crops are no different from regular crops, while criticizing the methodology of the aforementioned study. According to Monsanto, the researchers involved in the study did not use enough rats as test subjects, and the duration was too short to come up with conclusive findings — an ironic, absurd claim given that Monsanto’s own studies only last 90 days in duration, at most.

Notably, the large cancer tumors in the subject rats did not begin to appear until after they reached adulthood. Monsanto’s GM corn has been in the U.S. food supply for more than ten years now, and its corn is found in many popular breakfast cereals.

CRIIGEN.org issued a statement summarizing its findings of the recent rat study, saying:

“The implications are extremely serious. They demonstrate the toxicity, both of a GMO with the most widely spread transgenic character and of the most widely used herbicide, even when ingested at extremely low levels, (corresponding to those found in surface or tap water). In addition, these results call into question the adequacy of the current regulatory process, used throughout the world by agencies involved in the assessment of health, food and chemicals, and industries seeking commercialization of products.”

Following Russia’s ban, 19 countries out of the European Union’s 28-member bloc have now officially joined the fight against GMOs. As reported by EcoWatch, Austria, Belgium for the Wallonia region, Britain for Scotland, Wales and Northern Ireland, Bulgaria, Croatia, Cyprus, Denmark, France, Germany, Greece, Hungary, Italy, Latvia, Lithuania, Luxembourg, Malta, the Netherlands, Poland and Slovenia have all taken the “opt-out” clause of a European Commission rule passed in March 2015 that allowed its members to abstain from growing GMO crops.

In stark contrast to the growing anti-GMO sentiment among EU countries, however, several thousand miles away in the United States, Proposition 37, which would have required labeling of all food products containing genetically modified organisms in California, remains in limbo after its defeat back in 2012. Following its failure, no GMO labeling initiative has yet succeeded in the state.

Despite all the flak GMOs have been getting, most food regulators — and not only those in California — seem to keep turning a blind eye on the adverse effects of genetically modified produce. Mike Adams, the Health Ranger, attributes this to these regulators’ ties to Monsanto:

“In truth, Monsanto has managed to influence food regulators all around the world. It has paid money to numerous scientists in the USA, and it has essentially “placed” GMO-pushing individuals such as Michael Taylor into influential positions in government.

Rep. Dennis Kucinich has called for a national GMO labeling law. He says: “The FDA has received over a million comments from citizens demanding labeling of GMOs. Ninety percent of Americans agree. So, why no labeling? I’ll give you one reason: The influence and the corruption of the political process by Monsanto. Monsanto has been a prime mover in GMO technology, a multi-million dollar GMO lobby here and a major political contributor.”