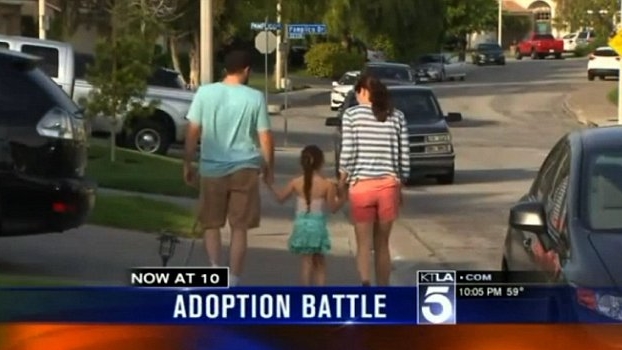 Six-year-old Lexi has only ever know Summer and Rusty Page as her parents.

But any day now the Santa Clara, California, child could be legally ripped from her loving foster home despite Rusty and Page’s fight to keep her with them.

Because of the ‘Indian Child Welfare Act’ – a federal law passed in the 1970’s aimed to protect the best interests of Native American children – she must live with Native American parents.

Scroll down for video Six-year-old Lexi (far left) is being removed from her foster parents, Summer (left) and Rusty (second from right) because she is Native American and they are not Now, Summer and Rusty are fighting to keep the child they have tried for more than two years to adopt with them.

‘Lexi doesn’t know another home. She finally knows what mom and dad means and they want to take that away from her. and we can’t stand idly by while that happens,’ Rusty told Fox 11.

Summer and Rusty also have a nine-year-old, another six-year-old and a two-year-old. Lexi is the family’s only foster child.

‘This little girl, we are her home. This is her family and that can all be rocked tomorrow,’ Summer said.

The Page family took the case to court, but their most recent emergency stay was lifted. The family filed an emergency stay with a court, but it was lifted and now the DCF can come take her away at any time

Department of Children and Family Services agents were expected to take Lexi from her home at 10am on Sunday but postponed after a large group of protesters took a stand against her removal.

The family is under ‘specific orders’ not to tell Lexi or their other children what is happening.

‘As a grandmother, it’s ripping my heart. It’s ripping me apart to see Lexi has been a part of our family for almost five years, and she’s not going to understand what’s going on.

‘The children are not going to understand the separation. This is going to destroy these children,’ Tari Kelly, Lexi’s foster grandmother, told ABC 7.

The Choctaw tribe has decided to place Lexi with extended non-blood relatives in Utah, who are not Native Americans and will not be living on the reservation. Lexi’s tribe, the Choctaws, said they just want what’s best for Lexi and have decided to place her with a non-blood relative in Utah The non-blood relative is not Native American and does not live on a reservation. The family is under orders not to tell Lexi or their other children what is about to happen

In a statement, the tribe said it wants what is best for the child.

‘The Choctaw Nation desires the best for this Choctaw child.

‘The tribe’s values of faith, family and culture are what makes our tribal identity so important to us.

‘Therefore we will continue to work to maintain these values and work toward the long-term best interest of this child,’ it said.

The Pages said they have not been told when Child and Family Services will be arriving to take Lexi, but believe the agents want to do the removal away from the eyes of the media and the community, according to ABC 7.

‘As hard as it is, and as scary as it is to go up against the people we going up against, we’re putting everything on the line.

A petition has been signed by more than 20,000 people to keep Lexi with her foster family