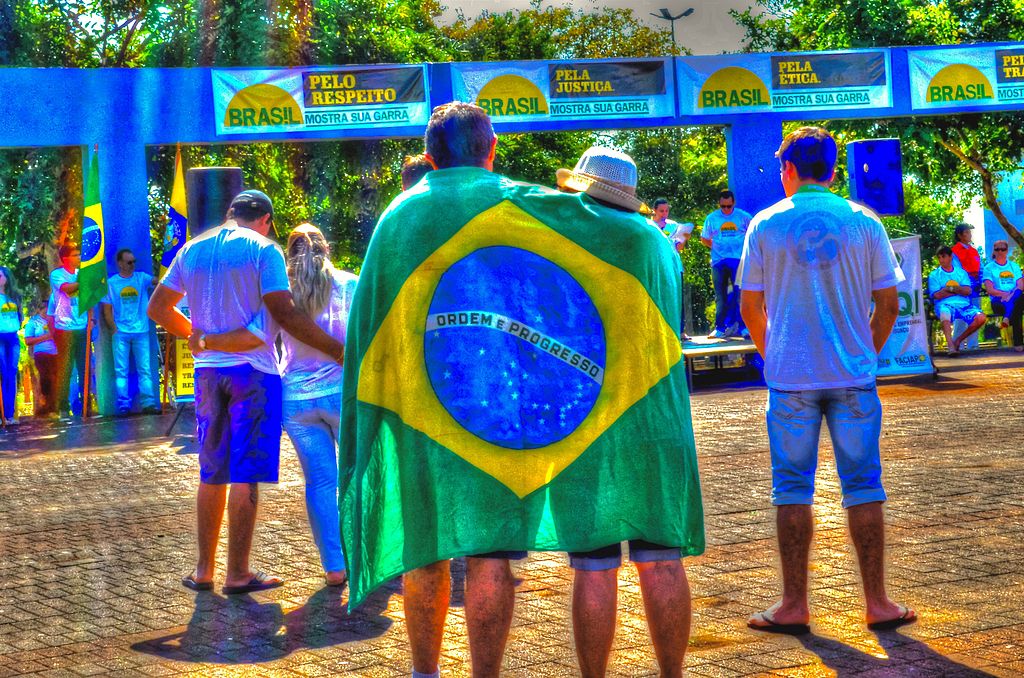 The biggest protests in Brazil’s history took place on Sunday, with millions of outraged citizens pouring into the streets across the nation to demand the ouster of radical president Dilma Rousseff and her corrupt, communist-minded Workers’ Party (PT). Brazilians from all walks of life also called for Rousseff’s predecessor, fellow PT operative and Obama buddy Luiz Inacio “Lula” da Silva, to be imprisoned for his role in the massive corruption scandal that has shaken Brazil to the core. In the Brazilian Congress, talk of impeachment is getting louder as the PT house of cards comes crashing down. And the consequences of the implosion of the radical party, whichopenly allies itself with Marxist-Leninists and was intimately involved in setting up the Castro-backed totalitarian network known as the Foro de São Paulo, could extend far beyond Brazil.

The massive protests took place all across the country. “Dilma out!” shouted furious citizens by the millions. In São Paulo, the largest protest in Brazil’s history brought almost 1.5 million people to Avenida Paulista, according to the military police. Similar protests, although not as gargantuan, took place in hundreds of cities and towns all across Brazil. In the capital, Brasilia, some 100,000 protesters took to the streets, according to law enforcement. According to police estimates, some three million protesters took to the streets nationwide. Critics and attendees who spoke to The New American suggested even those numbers could be too conservative, with other estimates suggesting four million protesters across Brazil. Others said the numbers were above six million or even eight million.

Either way, they were the largest in Brazilian history, by far. The latest protests were even larger than similar anti-regime protests that rocked Brazil last year. And that is despite President Rousseff warning of potential “violence” against protesters who took to the streets. “The darn right-wing gets 6.5 million people in the streets without a single crime, exchange of punches, or one police-related incident, and the government speaks of ‘fascist violence,’” fumed Olavo de Carvalho, a leading Brazilian opposition figure who helped expose the radical nature of the PT and its allies. “The government itself is paying agitators to throw punches, break windows, and set tires ablaze, yet claims to be the epitome of democratic order.”

The uprising is also about as mainstream as can be. In an editorial on Sunday, leading Brazilian newspaper Estadão noted that the protests highlight the fact that the public is fed up. “Most Brazilians, as they have for some time attested in public opinion polls, demand that the Workers’ Party’s Dilma Rousseff leave the presidency of the Republic. The opportunity to express that demand concretely, and, with it, drive the institutional machinery responsible for enacting it according to the Constitution, is offered today, in the popular protests scheduled for today. It is time for good Brazilians, exhausted in front of a president that does not honor the charge of the office and who is today the principal obstacle to national recovery, to say in a single, loud, appealing voice: ‘Enough!’”

It is clear that these demonstrations represent an uprising against the broader corrupt establishment, not just the corrupt PT, which is itself a tentacle of a broader problem. When former presidential candidate Aécio Neves tried to join the protesters, for example, Brazilians erupted in fury, blasting him as a “thief” and an ally of the corrupt PT. Running with the leftist “Social Democracy” party, Neves came close to winning the most recent presidential election that, according to critics, was marked by widespread fraud. But instead of seriously challenging the outcome based on credible reports of vote fraud from all across the country, Neves conceded to the PT and allowed the “fundamental transformation” of Brazil to proceed uninterrupted.

His rhetoric sounded much like the protesters, though. “The demonstrations today brought together citizens who, respecting all plurality, are united in seeking an end to this government,” Neves was quoted as saying in Brazilian media reports. “And we are in search of an exit to this impasse through the Constitution.” He was presumably making a reference to some calls for military intervention to remove the regime among some activists, a proposal that polarized the opposition and was seized on by pro-regime voices to paint PT critics as nostalgic for dictatorship. The public, though, was not buying Neves’ efforts to portray himself as a leader of the public uprising.

Other leftists, including environmentalist Marina Silva, another leading candidate in Brazil’s most recent presidential election, also distanced themselves from the PT and emphasized that impeachment was not a “coup,” as PT operatives have been attempting to claim. Even PT politicians are abandoning Lula and Rousseff as the cards come crashing down amid the biggest corruption and embezzlement scandal in Brazil’s troubled history. Some analysts compared it to rats fleeing a sinking ship.

Beyond the implications for Brazil’s communist movement and its allies, the uprising is also an ominous sign for Obama, whose administration used U.S. tax dollars to help finance the state-controlled oil giant Petrobras at the center of the corruption scandal that is rocking Brazil. Lula and his associates are known to be friendly with their current counterparts in Washington. In a video shot by BBC Brasil, Obama points to Lula and says, in Portuguese, “This guy is the man, I love this guy.” Then, in English, he praises Lula as the “most popular politician on Earth.” After the dubious reelection victory by Rousseff, an ex-terrorist whose communist terror group once kidnapped the U.S. ambassador to Brazil, Obama celebrated the news and vowed even closer ties with her regime.

The star of the protests seemed to be Judge Sergio Moro, who is overseeing the corruption case against Lula and his associates. The judge is currently considering a request by prosecutors on whether to put Lula in prison while he awaits his criminal trial for money laundering and massive corruption, which included diverting state funds to keep his radical party in power. Protesters all across Brazil carried giant inflatable Lula look-alike dummies dressed in prisoner stripes, and demanded that the corrupt ex-leader — a close ally of Castro and the international communist movement — be put behind bars.

A number of Lula’s associates have already gone down. Last week, a Brazilian judge sentenced Marcelo Odebrecht, the former CEO of the Odebrecht conglomerate, to 19 years in prison for his role in the corruption. And Rousseff, who served as a senior official in the Lula regime before becoming his hand-picked successor, is also known to be deeply intertwined with the corruption. The investigation into the “Petrolão” (Big Oil) scandal is known as “Operation Car Wash,” or Operação Lava Jato in Portuguese. More than a few senior government figures are ensnared in it.

But the scandal is hardly news to those who have followed Brazilian politics (without relying on the establishment press for information). Indeed, many protesters carried signs with Olavo de Carvalho on them, with some declaring that “Olavo was right.” The anti-communist author and philosopher has played a key role in raising awareness about the communist forces seeking to take over Latin America. He previously told The New American that Latin American communism was basically headquartered in Brazil. After years of hard work trying to expose Lula, Rousseff, and their international associates in tyranny, Carvalho’s work is finally paying off, as Brazil appears to be experiencing a massive public awakening.

In a statement released after the historic protests on Sunday, though, the renowned Brazilian figure warned that this was all just the beginning. Fixing the problems caused by PT and its allies will take decades, he said. “And the resistance will be even more fierce once the bandits are outside of the federal government, forced to search for support abroad,” he added. “The trouble is only just getting started.” Congressmen from across the political spectrum said they got the message and that it was time for Rousseff to be removed from power. But again, the road to recovery and real liberty will be long, and the PT still has powerful friends across Latin America and beyond.

Indeed, Rousseff, Lula, and the PT are at the center of an international communist network known as the Foro de São Paulo (FSP). Founded by Lula, Communist Cuban dictator Fidel Castro, the communist Sandanistas, and Marxist narco-terrorist groups such as the FARC, the totalitarian alliance came to dominate much of Latin America. FSP members and operatives have also received strong support from establishment forces in the United States, including the Obama administration, Big Labor, and the global government-promoting Council on Foreign Relations, despite being correctly identified as hostile to America and liberty by top U.S. officials. Moscow and Beijing have also been key supporters of the totalitarian alliance.

But with FSP tentacles under growing pressure almost everywhere — from Venezuela and Brazil to Ecuador, Argentina, Bolivia, Chile, and beyond — the so-called “Pink Tide” is now playing defense. Ironically, investors seemed delighted with the news of imminent regime change in Brasilia. Shares on Brazilian stock markets have been soaring as the end of Rousseff’s regime and a crackdown on widespread government corruption appear increasingly likely. She may well resign soon.

Still, the PT is powerful, and no doubt has some remaining tricks up its sleeve. Like rabid animals backed into a corner, the dangerous communist movement in Brazil is now especially dangerous. Americans and the U.S. Congress should ensure that the Obama administration does not intervene on behalf of its endangered ideological comrades in Brasilia.