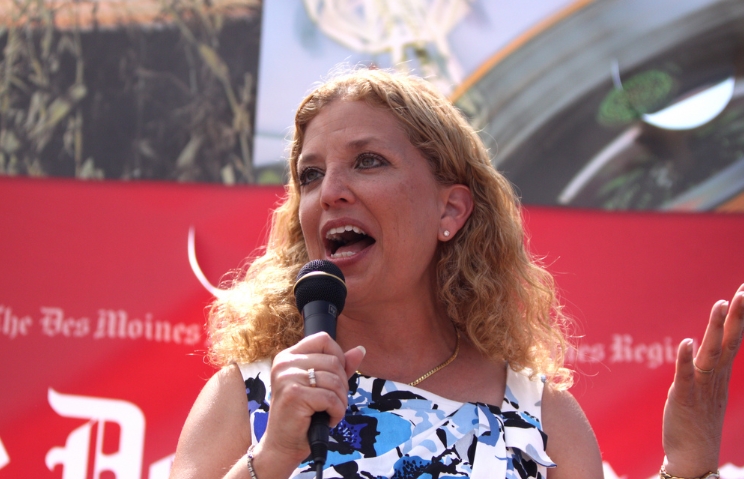 However, rather than motivating the pro-choice movement, her remarks backfired. Instead drawing immense criticism from abortion supporters who quickly took to Twitter, using the hashtag #DearDebbie, to voice their contempt over Schultz’s comments.

“Here’s what I see: a complacency among the generation of young women whose entire lives have been lived after Roe v. Wade was decided,” said the DNC chairwoman.

Schultz angered pro-choice supporters so much, that some even started calling for her resignation!

#DearDebbie resign. You're an embarrassment.

#DearDebbie, reproductive justice isn't listed on the DNC's website. With all due respect, who is complacent here? pic.twitter.com/lM4sHjds8y

Millennials are too busy to engage b/c we're running @AbortionFunds, repealing Hyde, & NOT GETTING PAID #DearDebbie https://t.co/nuqrnTn6bH

#deardebbie @dwstweets What you are seeing is the opposite of complacency. We will not be complacent with a corporate democrat #FeelTheBern

#DearDebbie @DWStweets is this what complacent young women look like? As a young Dem I take offense to your words. pic.twitter.com/KTJhvzgz7s

Perhaps it never occurred to Schultz, that those whom she considers to be ‘complacent,’ simply aren’t the baby killers she thought they were. Maybe they just aren’t that passionate about killing unborn children?

Secondly, it’s incredibly hypocritical for the DNC chairwoman to discuss complacency without acknowledging her contentment regarding strict marijuana laws still enforced by many U.S. States. Schultz managed to make several controversial statements during her New York Times interview, also mentioning her opposition to legalizing marijuana, even going as far as to compare it to heroin.

The DNC chairwoman, who’s successfully made herself widely unpopular in recent months, said she doesn’t “think we should legalize more mind-altering substances if we want to make it less likely that people travel down the path toward using drugs. We have had a resurgence of drug use instead of a decline. There is a huge heroin epidemic.”

When pressed about the fact that despite there being a widespread epidemic regarding opiate abuse, the state has not made the drugs illegal, Schultz was forced to admit that, indeed, there “is a difference between opiates and marijuana.”

Clearly, Schultz’s attempt to deflect failed. But that still doesn’t explain why she is so anti-marijuana, a seemingly bizarre stance considering the majority of Democrats, especially progressives (which she now calls herself), support marijuana legalization.

As usual, the answer becomes clear if you simply follow the money.

“The fifth-largest pool of money the congresswoman has collected for her re-election campaign has been from the beer, wine, and liquor industry,” The Intercept reports. “The $18,500 came from PACs including Bacardi USA, the National Beer Wholesalers Association, Southern Wine & Spirits, and the Wine & Spirits Wholesalers of America.”(1)

Obviously, Schultz’s opposition to marijuana stems from her being influenced by special interests, and in this particular case, those interests are that of the alcohol industry. Her position is particularly evil, considering what science says regarding the matter of which substance is most unhealthy. Between alcohol and pot, the answer clearly is booze.

“The Centers for Disease Control and Prevention estimates that during a recent period, ‘excessive drinking was responsible for one in 10 deaths among working-age adults aged 20-64,’” reports The Intercept.

Similar to the way Schultz angered abortion supporters with her flamboyant comments; she’s now also inflamed marijuana advocates, who happen to make up for a large portion of society. And they too, are calling for her resignation!

In 2014, 64% of Democrats were in favor of full legalization of marijuana. The DNC chair is still for prohibition https://t.co/96AdBiXUAq

TheJointBlog.com has launched a petition on Change.org calling for Schultz to be replaced by someone more pot-friendly.

“We are calling for the immediate removal of Debbie Wasserman Schultz as the Chair of the Democratic National Committee, to be replaced by someone who supports legalizing cannabis. Given that cannabis would reduce our prison population, increase tax revenue and remove a valuable asset used by criminal syndicates to increase their finances, this is an issue that effects and impacts all Americans, even if they don’t consume the substance,” states the petition.