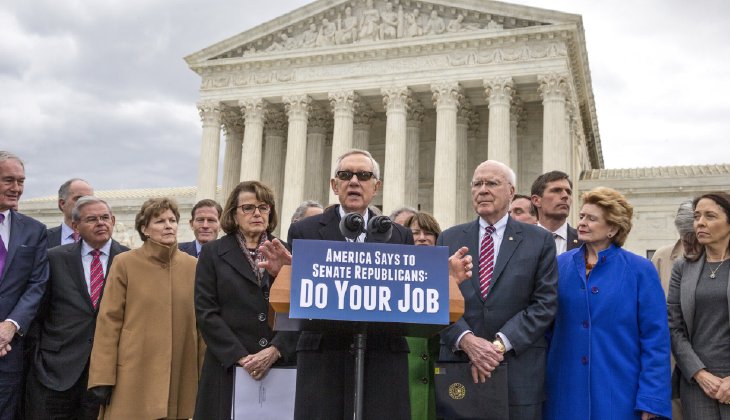 (Freedom.news) Senate Minority Leader Harry Reid, D-Nev., and fellow Democrats in the chamber are making a mockery of the rule of law, but none of them seem to care because like the White House they serve, politics and the next election cycle are much more important than the long-term viability of the country.

Reid and Co. are attempting to shame the Republican majority in the Senate to take up a vote on President Obama’s most recent Supreme Court nominee, Merrick Garland, because, they claim, the Senate must, according to the Constitution.

“Do your job” is the campaign they are using to force Republicans to do something they shouldn’t do, ever, which is give Obama another shot at putting another Left-wing hack on the nation’s highest court, which will endanger the constitutional order in ways that, as of right now, the Democratic Marxist Party can only dream of.

But while we’re on the subject of “do your job,” Reid and Co. should really be aiming that campaign at POTUS, who has done his level best to ignore his Article II, Sect. 3 duty to “take care that the laws be faithfully executed.” And he can start with federal immigration laws.

As reported by the Washington Times, Border Patrol agents – who are being inundated at the southwest border by hordes of illegal aliens – have said they know for a fact that the Department of Homeland Security, their parent agency, has no intention of deporting illegals who are already in the country. That kind takes the “security” part out of Homeland Security, doesn’t it?

Brandon Judd, president of the National Border Patrol Council, told a congressional panel recently that the orders amount to a new “catch and release” policy, which he said “amounts to amnesty” because it means many illegal immigrants are never asked to leave the country.

Judd provided his testimony in written answers released Monday by the House Judiciary Committee, saying that even in some criminal cases, agents are ordered to let illegal immigrants go without ever issuing them a Notice to Appear, or NTA, which is what puts them into deportation proceedings, the Times reported.

The paper said that the new instructions appear to violate Obama’s policy of targeting new arrivals for deportation – that is, those who arrive after Dec. 31, 2013. But Obama has made proclamations like this before, with the wink of an eye, and anyway, DHS chief Jeh Johnson is not going to defy his president; he is obviously operating under some authority from the White House, otherwise he wouldn’t be permitting the president to be openly defied.

Judd said they took their case directly to Deputy Homeland Security Secretary Alejandro Mayorkas, who told them not to bother, the Times reported.

“Deputy Secretary Mayorkas told us that the Border Patrol needs to focus its resources towards the worst of the worst. He said that by prioritizing those we choose to deport, we will help alleviate the burden on an already overburdened court system,” he testified.

“He further stated, ‘Why would we NTA those we have no intention of deporting?’ He also stated, ‘We should not place someone in deportation proceedings, when the courts already have a 3-6 year backlog,’” Judd said. “Since the day of this meeting, we have seen no improvements in our enforcement efforts and the morale of the Border Patrol agents is one of, if not the lowest in the entire federal government.”

No intention of deporting. While our borders are being violated willy nilly, we have a group of hypocrite senators more interested in scoring political points with a constituency who will vote for them anyway, even if they were all caught on camera robbing a liquor store, than doing what is best for the country by pressing a president to do his job – see that the laws are enforced.

And official Washington wonders why the people are so angry at all of them.

Actually, they’ve stopped wondering – and caring. There is such an arrogance and intentional disconnect the ruling class has with those who sent them to represent you could drive a Mack truck through the chasm.

That said, there is a political reckoning coming, but won’t can’t see that, either.