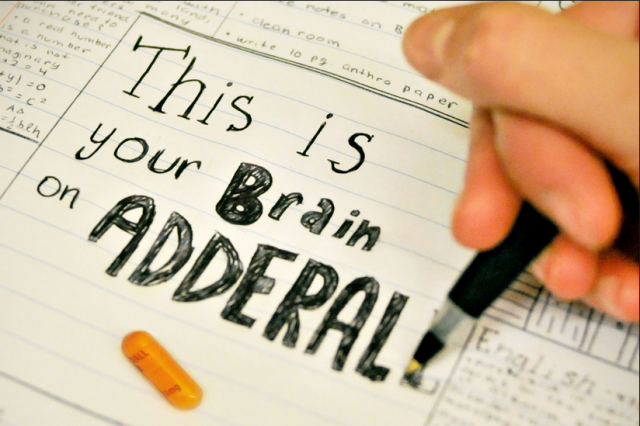 The pharmaceutical industry has a vested interest in keeping you sick, not just with cancer, diabetes, or high blood pressure, but with any type of mental illness they can create a category for. If you’re sad, you’ll get some fluorine loaded anti depressant, or if you’re anxious, they’ll throw you a valium or Xanax. And if your ten-year-old has just been diagnosed by his teacher as “attention seeking” or having trouble focusing, well, there’s an open door with stimulant medication available for his fix. Trouble is, medicines like Adderall are dangerous, deadly and addictive. But that didn’t bother the American Psychiatry Association (APA) who listed “hyper-kinetic impulse disorder” in their second edition of the Diagnostic Manual of Mental Disorders (DMS II) in 1968. That was just eight years after Adderall was approved for use. How convenient.

Fast forward to 1980. The DSM III was released with a listing called “attention deficit disorder.” In 1987, the name changed again to “attention deficit and hyperactivity disorder” or ADHD. That’s an easy four letter moniker to roll off one’s tongue and write on a prescription pad. This acronym been etched into the minds of the parents of restless children since then and hasn’t stopped. This ubiquitous and, according to neurologist Richard Saul, fake disorder, probably had to be fine tuned in order to sell more Adderall, ADHD’s made to order designer drug fraught with enormous risks, as reported by the Daily Sheeple:

“Adderall is actually a potent central nervous system stimulant that can cause serious – and potentially deadly – side effects. It is highly addictive and carries a high risk of abuse. Suicide, paranoia, psychosis (which led to suicide in this particularly disturbing case), sudden death (even in young children) fatal car accidents and even murder have been linked with the medication. Perhaps most disturbing: the drug can induce psychosis that is nearly identical to schizophrenia.”

Psychosis can happen when a person’s thinking and ability to have concrete emotions are so impaired, there is a loss of contact with reality. This break with what is logically understood occurs in schizophrenia. Jake’s Health Solutions clarifies this link:

“While schizophrenia is generally a root cause of psychosis, sometimes psychosis can be induced by stimulant medications like Adderall. Symptoms present in a very similar manner, as a 2012 study published in BMC Psychiatry explains:

…The thought disorders that occur in schizophrenia characterized by a splitting and loosening of associations, a concreteness of abstract thought, and an impairment in goal-directed thought, may be less prominent in amphetamine-induced psychosis. However, distinguishing the two types of psychosis on the basis of acute symptoms is probably very difficult. The similarities between the two conditions are, in fact, so pronounced that this has been used as an argument for using amphetamine-induced psychosis as a model for primary psychotic disorders.”

Adderall use is an epidemic among those who are not diagnosed with ADHD, but are looking for the stimulating effect, according to ABC news:

“Adderall [is] a highly addictive drug that works on the brain like cocaine or methamphetamine, and is rampant on the most competitive college campuses. An estimated 1 in 5 students has abused Adderall…

In a patient without ADHD, the amygdala – the part of the brain that controls emotions and aggression – can become overactive from stimulants like Adderall, leading to increased dopamine levels.  Studies at UCLA show that those who use amphetamines have higher rates of aggression, psychosis and suicide, according to [licensed social worker] Schlutz.

“It tricks the brain that it doesn’t need to make dopamine, and dopamine is the only chemical in the brain that once it is damaged, you never get it back,” said Schultz. “That results in severe depressions and mood dysregulation.”

With the serious and deadly risks of Adderall, reading the numbers of just how many people are prescribed this drug is surreal, as reported by Jake’s Health Solutions:

“From the years 2002-2006, sales of the drug increased by an estimated 3000 percent. In 2010 alone, the total number of Adderall prescriptions exceeded 18 million. Now, an estimated 25 million people use the drug. In 2015, 96 percent of pharmacies reported shortages of the medication. It is used by as many as 6.4 million children who have been diagnosed with ADHD.

In a study published in the February 2016 issue of The Journal of Clinical Psychiatry, researchers found that non-medical use of Adderall rose 67 percent from 2005 to 2011 among people ages 18 to 25, and emergency room visits related to the medication went up by 156 percent.”

Clearly, this is a serious and deadly epidemic perpetrated by the merger of the pharmaceutical industry in collusion with psychiatry. If you find yourself in their clutches, tell your friends, tell your family and get the help you need.