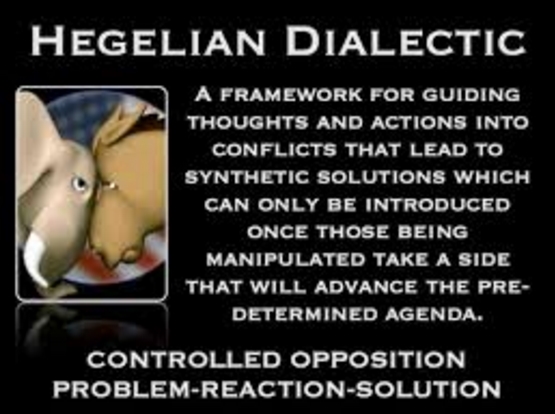 President Obama’s recent trips to Cuba and Argentina have sure raised some eyebrows. First, our dictator wanna be stood in front of mural of Che Guevara, which in and of itself was shocking enough, then he gives a speech in Argentina where he had the audacity to say that there was little difference between communism and capitalism. Many articles portrayed these events as being a shock to the American people; however, the reality is that Obama is just beginning to reveal who he really is, and before it’s all over it is highly likely that he will come out as a full-blown communist offering the twisted ideology as a solution to manufactured problems. The goal all along has been to discredit capitalism, present it as an oppressive system responsible for poverty and wealth inequality while depicting communism as a system that believes in fairness and total equality.  This plan is known as the Communist Peace Offensive.

Before we discuss this further we need to talk about the Hegelian Dialectic. This is a process of thought control that keeps us trapped in a narrative that pushes us closer to communism. It is also known as the Problem- Reaction- Solution strategy.  Originally developed by  Friedrich Hegel, the Hegelian Dialectic is a process where social change is guaranteed because opposing forces conflict, demanding a solution. Karl Marx and Fredrik Engels took this concept to a new level when applying it to their theory of communism. To them, the problem was an oppressive class of wealthy people exploiting the labor of the lower classes. It was believed that these two opposing forces would force a conflict where the obvious solution was a classless society where everybody understood their role was to serve the state, not their own interests. In fact, this was the reason World War One was fought; however, the desired end of people abandoning their loyalty to country and dedicating themselves to the communist ideal wasn’t realized.  Today, many people believe that the Problem-Reaction-Solution is deliberately employed through the use of false flag terror attacks, and the intentional manipulation of the economy in order to force more draconian controls. This could very well be the case; though, there is a much more subtle application.

In the article “Critical Thinkers Trapped in a Marxist Paradigm,” we discussed the Marxist origins of Critical Theory and how it is being used to teach our young students to be critical of their own culture. This is an application of the dialectic because they are attempting to portray freedom and our constitutional republic as the problem in the world while presenting collectivism as the solution. All of the protests we have witnessed in the past several years, Occupy Wall Street, the Burning of Baltimore and Ferguson and the Black Lives Matter movement, have been the necessary reaction to problems that were either created or over-exaggerated in order to offer communism as a solution. Consider the following from the 45 Communist goals, which incidentally, were entered into the congressional record in 1963.

Get control of the schools. Use them as transmission belts for socialism and current Communist propaganda. Soften the curriculum. Get control of teachers’ associations. Put the party line in textbooks.

Use student riots to foment public protests against programs or organizations which are under Communist attack.

Discredit the American Constitution by calling it inadequate, old-fashioned, out of step with modern needs, a hindrance to cooperation between nations on a worldwide basis.

Discredit the American Founding Fathers. Present them as selfish aristocrats who had no concern for the “common man.”

Belittle all forms of American culture and discourage the teaching of American history on the ground that it was only a minor part of the “big picture.” Give more emphasis to Russian history since the Communists took over.

It is very obvious that we are experiencing the application of these ideas. A couple of points need to me made, however. In the first listed goal the statement “put the party line in the textbooks” deserves more attention. Remember in the article “Psychology has Brought Communism to America” where we discussed how communist principles had been written into the psychology textbooks to such a degree, that anyone studying psychology automatically accepts communism as a reasonable philosophy? Remember the following quote from the Textbook on Psychopolitics?

“In the United States we have been able to alter the works of William James, and others, into a more acceptable pattern, and to place the tenants of Karl Marx, Pavlov, Lamarck, and the Data of Dialectical Materialism into the textbooks of psychology, to such a degree that anyone thoroughly studying psychology becomes at once a candidate to accept the reasonableness of communism.” (Beria, pp. 53)

This is a nationwide application of the Hegelian Dialectic being applied against our children. They are attempting to portray everything about America and our founding principles as being selfish and out of touch with global needs while offering communism as a solution. They are politicizing every issue imaginable, guns, racism, free speech, climate, land ownership, family and other principles of a free society and portraying them as the reason people suffer, while ignoring the fact that communism is a brutal ideology that led to the murder and starvation of nearly 180 million people in the twentieth century. One of these brutal communist murderers was, of course, Che Guevara.

Another point that needs to be made concerning these communist goals is the last one.  It basically says the plan is to discredit America, (historically) meaning our involvement in world affairs during the twentieth century, and give more emphasis to Russian history since the communists took over. This brings us back to the Communist Peace Offensive. Everything that we have discussed is designed to give the impression that communism is the much-needed solution to a world plagued by unsolvable problems.  John Dulles, Republican advisor the State Department in 1950, testified before a Senate Foreign Relations Subcommittee saying that the Soviet Union was engaged in all out open war against the U.S. He said the plan was to change the public opinion of the world to believe that western powers such as The United States were engaged in imperial wars of conquest and that it was the Soviet Union that stood for peace. This has been an extremely successful campaign as today, we are seeing multitudes of young people foolishly advocate for socialism. Of course, over the past several decades the U.S. has involved itself in wars that many would argue were unnecessary. Could that have been a deliberate strategy to discredit the United States on a world stage? This is very possible as psychological warfare and deception are the hall marks of communist strategy.

While Americans may be shocked by the President’s comments about communism, the truth is, as mentioned earlier, he is just preparing to reveal himself. President Obama was put in place because he is a community organizer, trained to stir the pot and cause discontent. He is a master at applying the Hegelian Dialectic. We were supposed to watch in awe as Obama swooped in and solved all of our problems so that when he finally revealed he was applying communist principles, we would all see that communism would be better for America. Fortunately, not all Americans have been brainwashed to such a degree and many of us can see him for what he is, a fool who is only discrediting himself. Many people believe that a communist takeover of America was a big scare tactic and that communism never presented any real threat. If that is the truth then how did we get to the point where so many people have no idea about the true history of communism while demonstrating a willingness to vote for socialist candidates? The answer is obvious; the application of Soviet-style propaganda and psychological warfare has been successful beyond anyone’s wildest dreams, and the time is rapidly approaching where America will be easily merged into a one world, communist system of government.