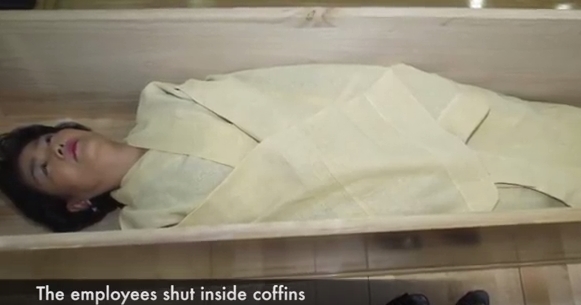 You think you have stress?

Employees and students in South Korea are under so much pressure to succeed, resulting in the country having one of the highest suicide rates on the planet. On the job, to avoid being disgraced employees have to always arrive before the boss, and leave after he has gone home. (And the boss is always a he.)

The city of Seoul tried borrowing from Spanish tradition and instituting a one-hour siesta into daily work life, but it didn’t help much. Employees then had the additional stress of either getting to work even earlier or leaving even later, to compensate for the hour lost during the siesta.

To help workers cope with the stress of their jobs, one employment agency conducts mock funerals, in which the employees get into caskets and pretend to be dead, ostensibly so that they will have more appreciation for life.

Before “dying,” the employees get decked out in white robes, sit at their desk writing final letters to their loved ones and watch videos of suffering people.

Then they get into their coffin, hug a picture of themselves, and wait for the lid to be slammed shut by the “Angel of Death,” portrayed by a man wearing a tall hat and dressed in all black — like Johnny Cash. Once entombed in their casket, they supposedly reflect on the meaning of life, in addition to probably getting really creeped out.

As the president of the employment agency explained: “Our company has always encouraged employees to change their old ways of thinking, but it was hard to bring about any real difference. I thought going inside a coffin would be such a shocking experience it would completely reset their minds for a completely fresh start in their attitudes.”

When not playing dead, those who work for the agency are also forced to laugh out loud together every morning. As one of the participants pointed out, “There’s so little to laugh about in a normal office atmosphere, I think this kind of laughter helps.”

Perhaps it does help.