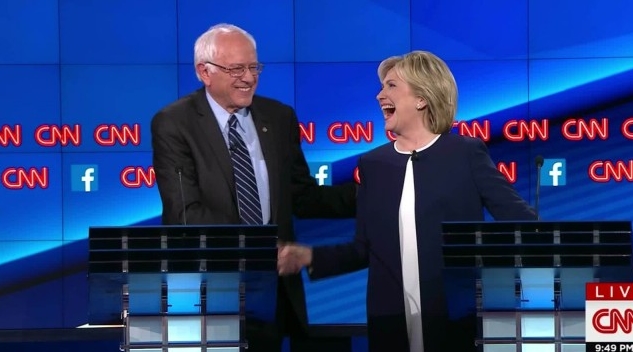 Democratic presidential front runner Hillary Clinton is like her husband in more ways than she would like to think.

No, she’s not the philandering type – at least, not that we know of or not the extent of the notoriously offensive Bill. But in terms of being a political pragmatist, Hillary is every bit as expertly deft as her former president husband. Given the manner in which the governing elites have hijacked our entire system of government, she should fit in well in a Washington she helped create.

Once upon a time, you see, Hillary Clinton was all against a Dow Chemical that had proven to be dangerous to pregnant women. That is, before she was in favor of Dow Chemical – like, after the global corporation began donating to her and her husband’s “foundation.”

Hillary Clinton said that a dangerous chemical could harm pregnant women and infants and needed to be regulated, but she appears to have backed away from the issue after the nation’s largest corporate producer of the chemical started partnering with and eventually giving money to the Clinton Global Initiative and an advisory firm linked to former President Bill Clinton.

The Democratic front runner’s personal and financial relationship with the CEO of Dow, which produces the industrial solvent Trichloroethylene (TCE), helps explain the innermost workings of the Clinton financial empire, and demonstrates will her willingness to ditch principles (if she ever really had any) in lieu of financial gain.

Once upon a time, as a U.S. senator from New York State, Clinton wrote a letter to then-Environmental Protection Agency (EPA) administrator Stephen L. Johnson regarding the hazardous chemical.

In the October 5, 2005 letter, Clinton stated that both children and seniors were vulnerable to the chemical’s toxic effects – it is used primarily as a metal degreaser. She urged the EPA to step in and take action to stop the chemical from harming anyone.

“Endicott, Hopewell Junction and Ithaca are known to be contaminated with volatile organic compounds where TCE is also known to be present,” Clinton’s Senate office said in a press release at the time touting her letter.

At the time there was a great deal of political pressure on Clinton and her New York colleagues in the House and Senate was high due to a case in Hopewell Junction where vapor from underground contaminated water seeped into the air in people’s homes, which caused a public health outcry from residents. Upon investigation, the EPA apparently discovered the contamination in well water in at least five homes in Hopewell Junction while conducting testing for traces of TCE.

In her letter, Clinton said:

We are writing to urge the United States Environmental Protection Agency (EPA) to establish health-protective “interim standards” for vapor intrusion of trichloroethylene, better known as TCE. TCE is a widespread contaminant found in at least 325 of the 1,242 EPA-listed Superfund sites, and is known to cause cancer and damage the nervous and immune systems. Children and seniors are especially vulnerable to TCE’s toxic effects…

…Delaying a national standard is a major constraint in evaluating potential health concerns at toxic waste sites. Some current federal and state TCE standards are more than two orders of magnitude less protective than the EPA’s 2001 reassessment concluded was needed to protect human health. Today, thousands of Americans may be exposed to unhealthful levels of TCE.

Clinton took the lead in signing the letter, which was also signed by an seven other senators.

Then in 2007, she introduced the TCE Reduction Act of 2008 as the bill’s lead sponsor. The legislation’s text made it clear that “pregnant women, infants, and children” are vulnerable to the toxicity of TCE.

The bill never made it to the floor, despite the fact that there was a Democrat majority in the Senate.

Now, Clinton could have pushed for the measure’s passage, knowing she would eventually run for president again, and burnish her environmental credo.

But then, “shortly after Clinton introduced her bill, the nation’s largest producer of TCE partnered with the Clinton Global Initiative (CGI) and eventually became a CGI sponsor,” Breitbart News reported.