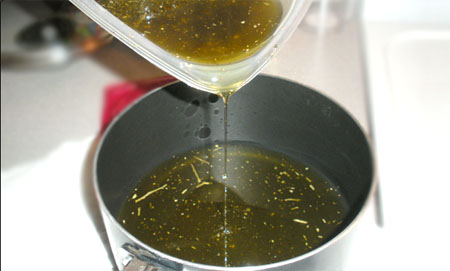 Rather than resort to chemotherapy and radiation to shrink an inoperable brain tumor, the father of an eight-month-old baby opted for a non-traditional treatment with cannabis oil. The baby’s physician, Dr. William Courtney, was at first weary about the medicinal benefits of cannabis oil, but has since become a believer in the wake of the child’s remarkable recovery.

While treating the child, the father reported that they dabbed cannabinoid oil on the baby’s pacifier and gradually increased the dosage. In just two months, the baby’s brain tumor shrunk so much that the pediatric oncologist deemed traditional therapy unnecessary.

Dr. Courtney added that the success of the treatment means that the child will not suffer the long-term side effects attached to high doses of chemotherapy and radiation.

“[C]urrently the child’s being called a miracle baby, and I would have to agree that this is the perfect response that we should be insisting is frontline therapy for all children before they launch off on all medications that have horrific long term side effects,” Dr. Courtney said, as reported by Natural News.

RELATED: The top three most CENSORED health films and books of 2016:
The Truth About Cancer docu-series | VAXXED documentary | A Mind of Your Own book on mental health through nutrition (all three threaten the medical establishment…)

Cannabis has a myriad of medicinal uses. It can be used to help treat cancer, asthma, neurological disorders and autoimmune diseases. In fact, research has shown that there are fewer pharmaceutical-related deaths in states where medicinal cannabis is legal than in states where the natural plant remains illegal.

Big Pharma is aware of the healing power of cannabis but refuses to acknowledge its therapeutic properties. Cancer is big business. Expensive chemotherapy drugs and radiation rake in $100 billion a year. In many cases, these treatments are unnecessary and provoke more health problems than they solve. The cancer industry keeps people ignorant of alternative therapies in order to keep people dependent on expensive cancer treatments that don’t work.

To add insult to injury, crooked doctors and oncologists have a history of telling non-cancer patients they have cancer, and then duping them into taking expensive chemotherapy drugs that cause lifelong side effects. Many cancer treatments actually cause cancer to return in the long run, and are responsible for permanent brain, kidney and heart damage.

Meanwhile, there are virtually no ill side effects attached to medicinal cannabis; and unlike many conventional treatments, it’s impossible to overdose on or become addicted to marijuana. Many cancer patients already resort to cannabis to improve their appetite, not because of the cancer, but because of the nausea that tends to accompany chemotherapy.

The Truth About Cancer

In short, the cancer industry needs to keep you in the dark about the medicinal benefits of cannabis. In an effort to expose the cancer industry for what it really is, the eye-opening FREE documentary The Truth About Cancer is about to be relaunched to the public on April 12.

This is a documentary that the cancer industry doesn’t want you to see. It threatens to put an end to the profit-driven scheme that is the cancer industry by unveiling alternative cancer treatments that can treat, prevent and even cure this virulent malady.

The more truthful medical information you have, the better you can make informed decisions about your health. Don’t be a victim of the cancer industry. Click here to register now at no cost and mark your calendar for April 12. This docu-series could literally save your life.