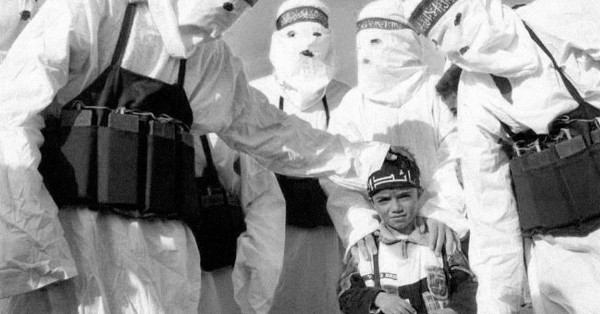 Left-wing sycophants are loathe to admit it, but there really is such a thing as “Islamophobia,” and it’s not some far-out, illogical fear. It’s real, and what’s more, it’s entirely logical.

So notes podcaster and talk show host Steven Crowder, a conservative, and creator of Louder with Crowder [see his website here]. In a recent post on his site, Crowder skewers the liberal lunacy regarding their unconditional support for Islam, despite knowing that a faction of Muslim faithful have used their religion to justify unspeakable, violent acts upon other human beings (many of them Muslims as well).

I know it’s super popular right now to call everything racism. This morning I put a bit of milk into my coffee. I made it “less black.” Racism. Who am I to whitewash my coffee? I’m calling the ACLU to get me into a reeducation program. #BlackCoffeeMatters.

If you think that’s going down the rabbit hole of “that makes zero sense” then congratulations, you’ve grasped my point. Islam is a belief system, it isn’t a race. Being alarmed by the tenants of that belief system doesn’t make me a “racist” anymore than putting cream in my coffee makes me a white supremacist.

The more recent accusation, though, is the Left charging anyone who says anything negative at all about Islam (even if it’s obvious – like, for instance, that some people are hiding behind their Islamic faith to kill and maim), as being guilty of “Islamophobia.”

Perhaps a breakdown of the word is actually in order. As Crowder notes, Islam is one of the world’s three major monotheistic religions, and indeed, the most recent, after Judaism and Christianity. It was founded in the 7th century AD on the Arabian peninsula (where the other two monotheistic religions were, at the time, dominant).

From a dictionary Crowder cited, but did not name specifically: “The ritual observances and moral code of Islam were said to have been given to Muhammad as a series of revelations, which were codified in the Koran,” Islam’s holy book.

Crowder further observes that “Islam is also well-known for its mistreatment of women, the belief that infidels (non-Muslims) must die, and a tendency for factions of Islam to blow people up. Not anecdotal evidence, but purely observable, substantiated data.”

And to prove his point, he included a series of Pew Research Center charts [here, here, and here] with his post, indicating the percentage of Muslims in various countries who favor the death penalty for leaving Islam, stoning as punishment for adultery, and who believe sharia law is the word of God.

Now, the word phobia generally means having an irrational, unjustified fear of, or aversion to something.

That may be true of an inanimate object or food group – “he has a phobia about broccoli” – but that is not true of a group of people who want to kill you simply because you don’t share the same religious tenets as they do.

But hey, the Islamic State is extreme – at least to most of us in the West. But not to 42 million Muslims who have said that they support the violent, militant group.

So, it must just be a matter of interpretation, right? Not to liberals, apparently; killing for the “reason” of religious differences is not only justifiable, but anyone who doesn’t think so is suffering from irrationality.

If they had to do so, however, would their view of “Islamophobia” change?

“…[B]eing wary, cautious or even so-called ‘afraid’ of Islam isn’t ‘phobic.’ It’s rational. It’s the end result of a long line of critical reasoning. Islam seeks to destroy our way of life, our freedoms, to enslave us in their beliefs,” Crowder writes.