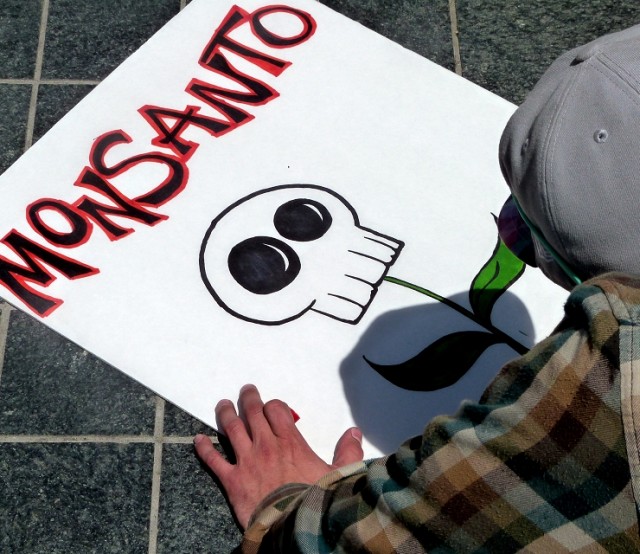 Monsanto’s history of spreading chemical death has been well documented. Following the Viet Nam war, their portfolio was so toxic, they divested themselves of Agent Orange, DDT and PCBs. What remained was their best seller, the ubiquitous glyphosate-based Round Up herbicide. With White House support, a squashing of scientific opposition and billions invested over two decades, they succeeded in forcing the genes of a bacteria resistant to Round Up – along with a viral promoter gene – into the food supply. For over two decades, farmers have been told they’ll use less herbicide, get more yield and help feed the world. All lies.

So it’s not surprising as the truth is exposed, Monsanto turns to a well tested mechanism. Is it bribery to fund scientists or professors to speak, write, claim whatever it is that you want them to say? Like when Coca-Cola company paid scientists $1.5 million to proclaim that it’s not really the sugary drinks that make you obese, it’s because you don’t exercise!

The love of money is the root of all evil.  Man loves his mammon and Monsanto has plenty, at least for now.

It’s possible that the shills for Monsanto really believe the hype of GE technology, or perhaps their careers are dependent on the endowments that Monsanto has already bestowed. There may be many reasons why they take the money. But unlike the disbanded Coca Cola “Global Energy Balance Network,” which was out front and sassy, the recent revelations about Bruce Chassy, Professor Emeritus of Food Science and Human Nutrition at the University of Illinois-Urbana-Champaign, had to be ferreted out by a Freedom of Information Act request.

We owe a debt of gratitude the folks at U.S. Right to Know. It was their due diligence and persistence in requesting the FOIA so they could expose the extensive communication and support from Monsanto on Chassy’s behalf:

“The emails disclose that Monsanto, the leading developer of GMOs, was making financial contributions to the university for Chassy’s use over the same period that Monsanto or Monsanto-affiliated public relations operatives were providing Chassy pro-GMO content and/or editing for presentations, papers and videos.

The emails also reveal that Monsanto and a public relations operative helped Chassy set up a nonprofit group and website called Academics Review to criticize individuals, organizations and others who raise questions about the health or environmental risks of GMOs.

In a recent example, Chassy co-authored a series of articles that argue GMO labeling is a “disaster in waiting,” again with no disclosure of his collaboration with GMO developer Monsanto.”

That series of articles referred to above were co-written with a well known GMO shill, Jon Entine.  It is tragic that it took a Freedom of Information Act to get the skivvy on the payoffs between Monsanto and Chassy, Kevin Folta and all the others involved in promoting this dangerous and unnecessary technology, but it’s not surprising. With billions of man’s mammon at stake, the truth gets in the way. Evil likes to lurk in the dark where it thinks it can’t be seen. But as with the GE seed, it can only imitate while proudly chattering lies and buying time. Evil denies a Creator who made every tree and plant with seeds that reproduce after their own kind. Seems those folks doing their work in the dark have also forgotten these words from the Psalms:

“When the wicked spring up like the grass and all the workers of iniquity do flourish, it is so they will be destroyed forever.”