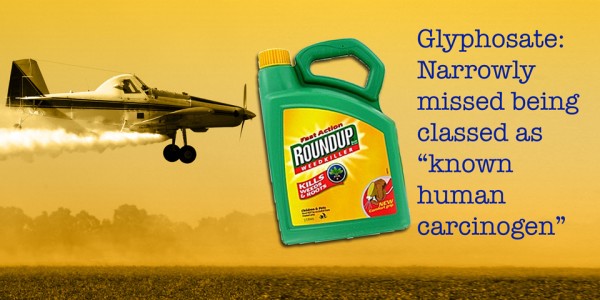 Germany’s Pesticide Action Network (PAN) is one of six non-governmental organizations (NGOs) that have filed a legal complaint against the groups that are responsible for providing safety assessments for Monsanto’s patented herbicide glyphosate. These agencies – the German Federal Institute for Risk Assessment (BfR) and the European Food Safety Authority (EFSA) are also in charge of renewing Monsanto’s license to use this toxic herbicide in the European market. But, according to GMWatch, there is an important disparity in play:

“In March 2015, glyphosate was classified by the International Agency for Research on Cancer (IARC) as a probable human carcinogen. But in Europe, the German Federal Institute for Risk Assessment (BfR) – acting as a Rapporteur for the European Commission – and the European Food Safety Authority (EFSA), approved the industry’s application and proposed to classify glyphosate as ‘non-carcinogenic’. The 2009 EU pesticides law (1107/2009) forbids active substances which can cause cancer from being used as pesticides but now the green light has been given for glyphosate’s re-approval in Europe.”

The data that the BfR depended on for its assessment came from the Glyphosate Task Force, a non-legal biotech cheerleading consortium formed specifically to ensure that the European Union could easily renew the glyphosate licensing, which must be concluded by June 2016. The group of companies involved in this task force are the usual suspects. Here are a few of the more recognizable names, courtesy of the task force website:

The Glyposate Task Force materials include a myriad of well-worn lies and talking points as proof of glyphosate’s record of safety, including these two queries found on their Q & A section:

Is glyphosate harmful to frog populations?… Studies linking glyphosate usage to a decline in amphibian populations have been largely discredited.

The reading list the Glyphosate Task Force used did not include material from the late Scientist Andres Carrasco, who was the Director of the Laboratory of Molecular Embryology, University of Buenos Aires Medical School and a lead researcher with Council of Scientific and Technical Research in Argentina. GM Watch EU provides the data:

“Research published in August 2010 by Professor Carrasco found that glyphosate causes malformations in frog and chicken embryos[PDF] at doses far lower than those used in agricultural spraying.”

“It is hard to understand how the BfR can simply adopt the claims from Monsanto. Monsanto had already been in conflict with the law and it is not the first time that they gave incorrect infomration about glyphosate”, says Josef Unterweger, the lawyer who pressed charges against Monsanto, BfR and EFSA on behalf of the NGOs.

Fortunately, it’s not just the NGOs who have raised serious objections. According to GM Watch, three nations within the European Union have stated they will not accept the EFSA assessment:

“A rebellion by several EU countries could scupper plans by the European commission to approve the relicensing of a weedkiller linked to cancer by the World Health Organisation (WHO)… France, the Netherlands and Sweden have all said they will not support an assessment by the European food safety authority (Efsa) that glyphosate is harmless.”

This pushback is good news. The absolute deadline for glyphosate’s renewal in the European Union is June 2016, though the vote was expected sooner. Ultimately, regardless of the multiple billions spent creating their kingdom of glyphosate lies, it will be defeated. Evil always eats its own tail.