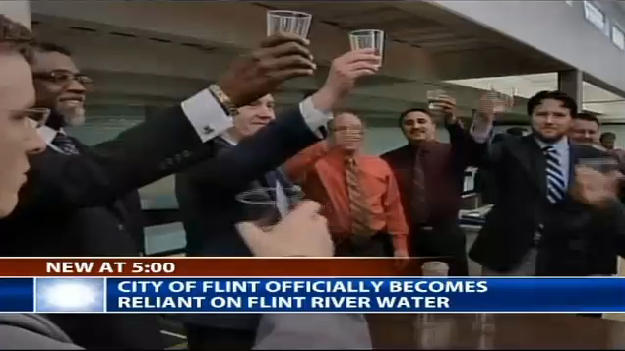 The ongoing crisis with Flint, Michigan’s water supply continues to unfold, much like the learning disorders and other more catastrophic effects in the children who were subject to the lead in the water. Accusations of guilt and lack of leadership abound at every level of government. As in every investigation, access to emails, agreements, documentation of who said, or did, or agreed to any action during these events are critical to the discovery of the guilty parties who endangered the residents of Flint. Stealing, withholding or shredding documents could imply guilt, though such actions are not a guarantee. But it is telling that in December of 2015, there was a break in at the Flint City Hall office where the water records were kept, as reported by Government Slaves:

“Mystery still surrounds an unsolved December break-in at an executive office  inside City Hall where Flint water files were kept. As of Friday, March 18, there were still no suspects in the case, and officials say it may never be known what — other than a TV — was taken.

“But the city’s new police chief Tim Johnson says it’s too suspicious that there was a break-in where important documents were kept, just as  investigations began heating up and decision makers were beginning to be held accountable. ‘It was definitely an inside job. The power cord (to the TV) wasn’t even taken. The average drug user knows that you’d need the power cord to be able to pawn it,’ Johnson said. ‘It was somebody that had knowledge of those documents that really wanted to keep them out of the right hands, out of the hands of someone who was going to tell the real story of what’s going on with Flint water.’

“Flint Mayor Karen Weaver said documents were strewn about the room, and it is impossible to know if any of them were taken.”

It was April 25, 2014 when Flint, Michigan officials raised their first glass of tainted water from the Flint River. This was nearly two years after the Michigan Treasury met with Flint leaders about their water program. Michigan Public Radio provides a detailed timeline of this water crisis. There were twists and turns. Three Flint city emergency managers grappled with this issue. In October 2012, Darnell Earley was the third man hired for that job. He refused to renew the contract with Detroit’s offer of water. General Motors complained about the corrosive effects of chlorine. They demanded and received better water before the citizens.

E coli and lead were discovered.  The State of Michigan environmental regulators gave a go signal and apparently lied to the EPA about adding chemicals to protect the pipes. According to The Washington Post, this crisis is a monumental government failure on all levels and a classic conflict about price and control of resources:

“The catastrophic decision by Flint, Mich., to switch to a water supply that brought toxic lead into thousands of homes is routinely portrayed as part of a long-term move to a new pipeline intended to save a destitute government millions of dollars each year. The reality is much more complicated.

“The Detroit water system, which had supplied Flint for a half-century, fought fiercely until 2013 to keep the city as a customer. It ultimately offered rates that it claimed would cost 20 percent less than Flint’s share of the $600 million plan to build the pipeline from Lake Huron, according to documents, interviews and media coverage of those events.

“Had Flint officials stuck with Detroit’s water, they would not have had to rely on the Flint River as an interim water source and lead would not have leached from the city’s aging pipes into the taps of some of its 100,000 residents.

“‘At a minimum, one would have to ask some pretty tough questions about whether it made sense to build new water infrastructure for a mature and declining population,’ Eric Scorsone, director of the Center for Local Government, Finance and Policy at Michigan State University, said Tuesday. ‘I think the question is: What is the gain from this?'”

It seems as though these  tough and thoughtful questions were never truly asked by any of the officials in charge.

As with any toxic source that enters the body, it is critical to counter act those poisons with the cleanest food available.