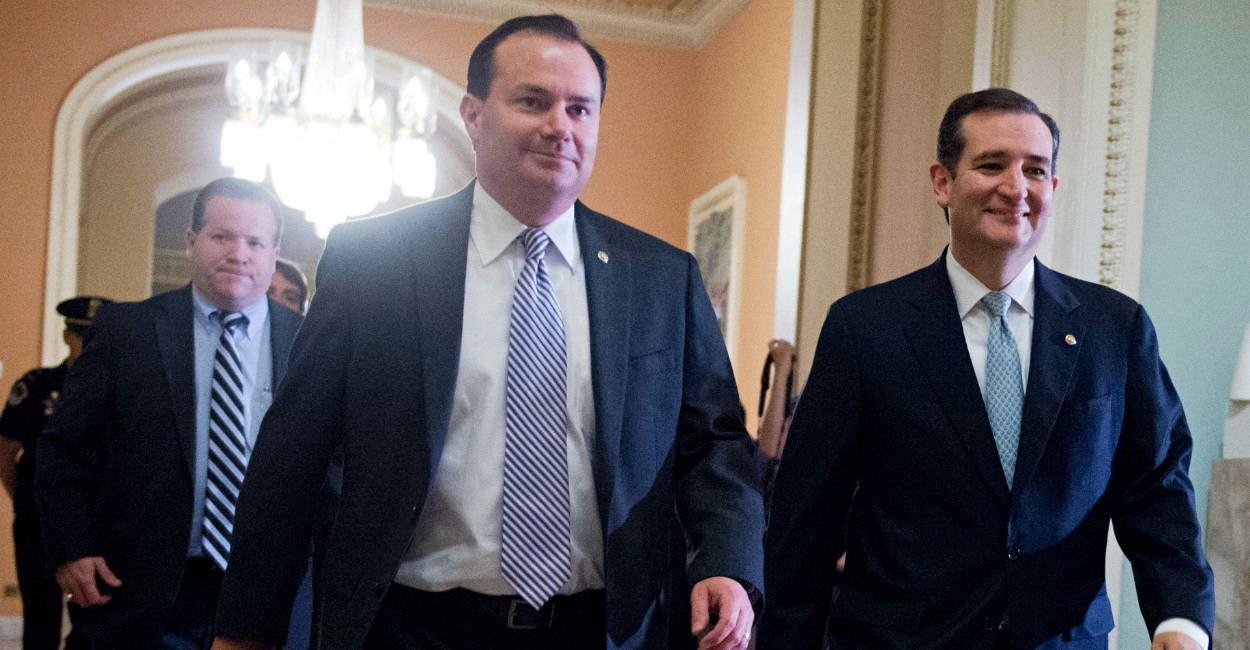 (BigGovernment.news) Efforts to block or even eradicate the Justice Department’s controversial “Operation Choke Point,” which targets businesses the administration doesn’t like, have been numerous and frequent in the House of Representatives, but the issue didn’t seem important to the GOP-led Senate. Until now, that is.

As first reported by The Daily Signal, GOP Sens. Ted Cruz of Texas and Mike Lee of Utah introduced legislation on Wednesday that seeks to dismantle the program.

“Under President Obama’s reign, the DOJ has abandoned its longstanding tradition of staying out of politics and has instead become a partisan arm of the White House,” Cruz, a leading candidate for the Republican presidential nomination, said. “The Obama administration initiated Operation Choke Point to punish law-abiding small businesses that don’t align with the president’s political leanings. The DOJ should not be abusing its power by trying to bankrupt American citizens for exercising their constitutional rights.”

The measure, called the Financial Institution Customer Protection Act, would ban federal agencies that oversee banks from requesting or instructing them to terminate customer accounts “unless the regulator has material reason.”

In addition, the measure would also require banking regulators to put in writing all “formal or informal” requests for the termination of accounts, while requiring regulators to file an annual report to Congress listing those requests.

The bill also amends the Financial Institutions Reform, Recovery and Enforcement Act of 1989.

Under Operation Choke Point, critics contend the administration and the bank regulation bureaucracy have abused their power by pressuring banks to shutter the accounts of entire industries that are opposed by the White House for political reasons, which include payday lenders and gun dealers.

“Our right to bear arms—a right granted by God and protected by the Constitution—is fundamental to the protection of all our other rights,” Lee told The Daily Signal in a statement. “An executive branch bent on taking away this right, through any administrative means necessary, is a danger to all Americans. That is why I am proud to co-sponsor the Financial Institution Customer Protection Act, which would end the federal government’s ability to abuse financial regulations to target firearm proprietors like they did during Operation Choke Point.”

Identical legislation passed in the House in February, with bipartisan support, by a 250-169 margin. It’s primary champion is Rep. Blaine Luetkemeyer, R-Mo.

Government documents [PDF] show that the program was designed by a politicized Justice Department in 2012 to “attack Internet, telemarketing, mail and other mass market fraud against consumers, by choking fraudsters’ access to the banking system.” The program was carried out by the Justice Department using its investigative powers while partnering with other federal agencies like the Federal Deposit Insurance Corporation (FDIC) that have oversight roles over banks.

Since the program began, a number of firearms dealers, pawn shops and short-term lenders have reported having their bank accounts shut down.

Luetkemeyer told The Daily Signal that the effort by Cruz and Lee “confirms that Americans, all across the country, are speaking up after been affected by Operation Choke Point.”

“Sens. Lee and Cruz recognize the need for greater transparency in the Department of Justice and federal banking agencies,” he added, as reported by The Daily Signal. “Operation Choke Point runs contrary to who we are as Americans, and I want to thank the senators for joining me in this effort. I look forward to working with them to encourage the Senate to bring this bill to the floor in the very near future.”