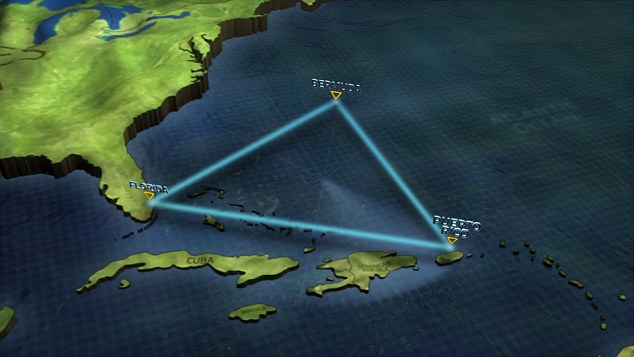 A team of scientists created a bit of a frenzy this week after purporting an alternative hypothesis that could explain the unusual number of missing ships, planes and people in the Bermuda Triangle.

Researchers at the Arctic University of Norway purport that craters on the seabed near the coast of Norway were created by pockets of methane gas that exploded. These gas blow-outs are rumored to be responsible for the disappearance of ships and planes in the Bermuda Triangle.

The Bermuda Triangle, also known as the Devil’s Triangle, stretches between Puerto Rico, Miami and Bermuda, encompassing an area of 500,000 square miles.

“We have discovered many large craters on the seabed in the central Barents Sea. Analyses suggest that blowout of methane gas once the ice retreated after the last Ice Age formed these craters. We have yet to publish these results, so these are preliminary. What I can say is that we are not making any links to the Bermuda Triangle”, Professor Karin Andreassen at CAGE, told sources.

“Craters are gigantic, up to one kilometer wide and 30 meters deep, and give evidence on blowouts of gas from the seabed. Blowouts can be linked to thawing of gas hydrates, which is methane in form of ice, beneath the seabed after the last Ice Age ended. But conditions during the last ice age can not be compared with what we see today”, he added.

Shedding light on the abyss

The systematic review of methane gas explosions follows a year after Russian scientist Igor Yeltsov, head of the Trofimuk Institute, made a connection between gas hydrates and the Bermuda Triangle:

“There is a version that the Bermuda Triangle is a consequence of gas hydrates reactions,” he said. “They start to actively decompose with methane ice turning into gas. It happens in an avalanche-like way, like a nuclear reaction, producing huge amounts of gas. That makes the ocean heat up and ships sink in its waters mixed with a huge proportion of gas.”

Estimates about how many ships, planes and people have been swallowed by the Bermuda Triangle vary considerably. Some estimates purport that more than 100 ships and planes have vanished within this area over the decades.

Waterspouts are also common in the Bermuda Triangle, which are essentially tornadoes over bodies of water. Waterspouts can reach wind speeds more then 120 mph. The water vortex’s occur frequently off the coast of Florida during the summer, when the air is humid and the water is warm.

Although the idea of methane gas explosions gobbling up ships sounds good in theory, the natural occurrence of ocean craters off Norway has yet to be replicated. To make matters worse, according to the Journalist Larry Kusche, many of the purported ships and planes that sank in the Bermuda Triangle were found nowhere but in the imagination of writers. Many of the ships that mysteriously vanished actually sank in sea storms far outside the Bermuda Triangle.

Furthermore, the very concept of the triangle has been called into the question. In a 1975 book “The Bermuda Triangle Mystery: Solved,” Arizona State University research librarian Lawrence David Kusche explained that the number of missing ships and planes in the area was no more significant than other regions with similar weather cycles.

In other words, the Bermuda Triangle mystery may not actually be a mystery. Although scientists have documented methane gas explosions in other regions, debate wages on about how they could disrupt ships and planes.