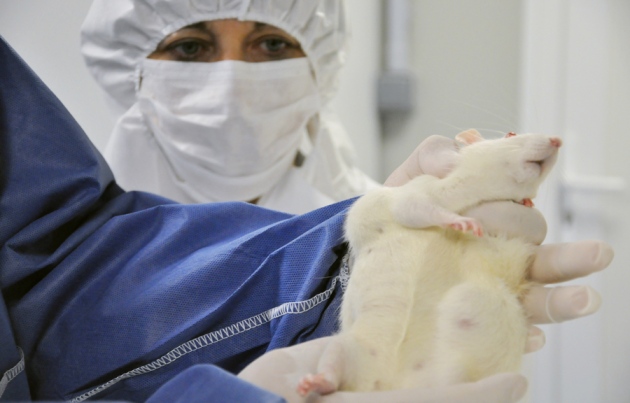 Learn how you can transform your health through clean eating by signing up for the FOOD REVOLUTION summit for free here!

Genetically modified (GM) corn is rat poison. That is at least what the results of a controversial study linking GM feed with cancerous tumor growths in rats would seem to suggest.

Even more alarming, the study found these adverse health reactions were observed in rats exposed to Roundup Ready herbicide at levels many regulators regard as safe.

Roundup Ready crops are engineered to be resistant to Monsanto’s Roundup herbicide. The active ingredient in the herbicide is glyphosate, which the World Health Organization (WHO) recently deemed probably carcinogenic to humans. In the scientific literature, Roundup Ready corn is referred to as NK603.

The study has been heralded as “the most thorough research ever published into the health effects of GM food crops and the herbicide Roundup on rats.” Images of the tumor infested rats took social media by storm.

Among other findings, the research found that 50 to 80 percent of female rats developed three large tumors at the start of the 24th month. Approximately 70 percent died, in comparison to 20 percent in the control group.

Furthermore, the tumors of rats of both sexes fed GM corn were two to three times bigger than rats not fed GM corn. The massive tumors developed in females after seven months. Comparable tumors didn’t develop in the control group until 14 months. The researchers report that the tumors were “deleterious to health due to a very large size.”

In response to the study, Monsanto said the results were not significant, because the development of tumors in the GM fed rats were “within historical norms for this strain of laboratory rats, which is known for a high incidence of tumors.” In short, the biotech giant attributed the tumors to the rats’ genetics. What is ironic is that Monsanto conducted a similar study of a much shorter duration, 90 days, which enabled their NK 603 Roundup-tolerant GM maize to be approved by the EFSA, explained Mike Adams, author of the new book Food Forensics: The Hidden Toxins Lurking in Your Food and How You Can Avoid Them for Lifelong Health.

“This is a basic principle of science and it is worrying that attempts are being made by pro-GM lobbyists to override it in the interests of keeping the products of powerful multinational biotechnology companies on the market,” reads a public briefing made by the food sustainability nonprofit Earth Open Source.

The briefing also noted that using “historical data” to disregard statistically relevant data is junk science and rejected by serious scientists. Real scientific studies almost always have a control group and an experimental group to observe differences between the two populations, and to make sure those differences are due to the tested variable at hand.

“The use of historical control data is an unscientific strategy used by industry and some regulators to dismiss statistically significant findings of toxicity in … studies intended to evaluate safety of pesticides, chemicals, and GMOs,” the briefing states.

Seralini’s long-term study linking glyphosate to rat tumors was unfortunately retracted from the journal Food and Chemical Toxicology due to pressure from Monsanto lobbyists. The results of the study have since been republished in Environmental Sciences Europe.