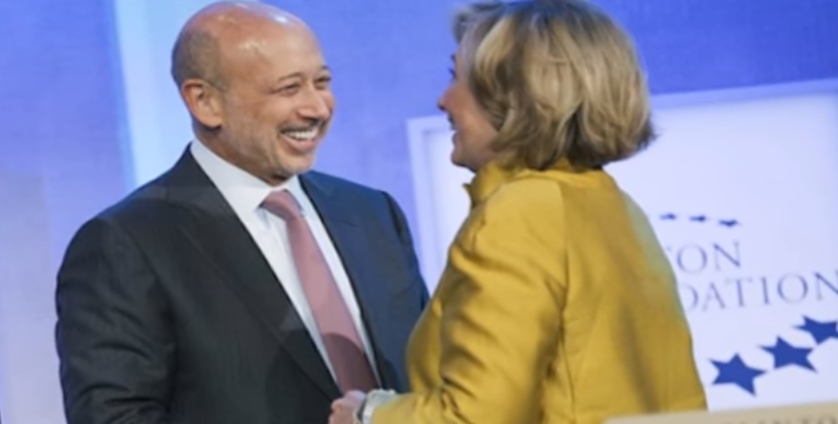 We’ve seen bits and pieces emerge from Hillary Clinton’s infamous $225,000 speech to Goldman Sachs in October 2013, but an article published by the Huffington Post yesterday adds some additional perspective. In a nutshell, the author believes that a release of these transcripts would be so damaging it would end her bid for the presidency.

Here are a few excerpts from the Huffington Post piece:

The reason you and I will never see the transcripts of Hillary Clinton’s speeches to Wall Street fat-cats — and the reason she’s established a nonsensical condition for their release, that being an agreement by members of another party, involved in a separate primary, to do the same — is that if she were ever to release those transcripts, it could end her candidacy for president.

In fact, it appears they’d cause enough trauma that Clinton would rather publicly stonewall — to the point of being conspicuously, uncomfortably evasive — in public debate after public debate, to endure damning editorial after damning editorial, and to leave thousands and thousands of voters further doubting her honesty and integrity, all to ensure that no one outside Goldman Sachs, and certainly no voter who wasn’t privy to those closed-door speeches, ever hears a word of what she said in them.

The real experts on this topic are the friends and acquaintances of Hillary’s who, for whatever reason, have chosen to be candid about what they believe is in those speeches. And it’s only that candor that helps explain the longest-running mystery of the Democratic primary — a mystery that’s been ongoing for over seventy days — which is this: why would anyone pay $225,000 for an hour-long speech by a private citizen who (at the time) claimed to have no interest in returning to politics?

Mr. Sanders has implied that there are only two possible answers: (a) the money wasn’t for the speeches themselves, but for the influence major institutional players on Wall Street thought that money could buy them if and when Clinton ran for President; or (b) the speeches laid out a defense of Wall Street greed so passionate and total that hearing it uttered by a person of power and influence was worth every penny.

Per Clinton surrogates and attendees at these speeches, the answer appears to be both (a) and (b).

Now here are a few examples of what we’ve heard from others:

“Making the transcripts of the Goldman speeches public would have been devastating….[and] when the GOP gets done telling the Clinton Global Initiative fund-raising and expense story, Bernie supporters will wonder why he didn’t do the same….[As for] the email story, it’s not about emails. It is about [Hillary] wanting to avoid the reach of citizens using the Freedom of Information Act to find out what their government is doing, and then not telling the truth about why she did.”

2. Goldman Sachs Employee #1 (present at one of the speeches)

“[The speech] was pretty glowing about [Goldman Sachs]. It’s so far from what she sounds like as a candidate now. It was like a ‘rah-rah’ speech. She sounded more like a Goldman Sachs managing director.”

3. Goldman Sachs Employee #2 (present at one of the speeches)

“In this environment, [what she said to us at Goldman Sachs] could be made to look really bad.”

4. Goldman Sachs Executive or Client #1 (present at one of the speeches)

“Mrs. Clinton didn’t single out bankers or any other group for causing the 2008 financial crisis. Instead, she effectively said, ‘We’re all in this together, we’ve got to find our way out of it together.’”

5. Paraphrase of Several Attendees’ Accounts From The Wall Street Journal

“She didn’t often talk about the financial crisis, but when she did, she almost always struck an amicable tone. In some cases, she thanked the audience for what they had done for the country. One attendee said the warmth with which Mrs. Clinton greeted guests bordered on ‘gushy.’ She spoke sympathetically about the financial industry.”

6. Goldman Sachs Employee #3 (present at one of the speeches)

“Clinton offered a message that the collected plutocrats found reassuring, declaring that the banker-bashing so popular within both political parties was unproductive and indeed foolish. Striking a soothing note on the global financial crisis, she told the audience, ‘We all got into this mess together, and we’re all going to have to work together to get out of it.’”

The problem with the quotes above is not merely their content — which suggests a presidential candidate not only “gushingly” fond of Wall Street speculators but unwilling to admonish them even to the smallest degree — but also that they reveal Clinton to have been dishonest about that content with American voters.

Last night in Brooklyn Mrs. Clinton said, “I did stand up to the banks. I did make it clear that their behavior would not be excused.”

Yet not a single attendee at any of Mrs. Clinton’s quarter-of-a-million-dollar speeches can recall her doing anything of the sort.

During last week’s debate in New York, Hillary demanded that Bernie release his tax return, and he produced it the very next day.

As far as Clinton’s speech transcripts, we’re still left with the following: 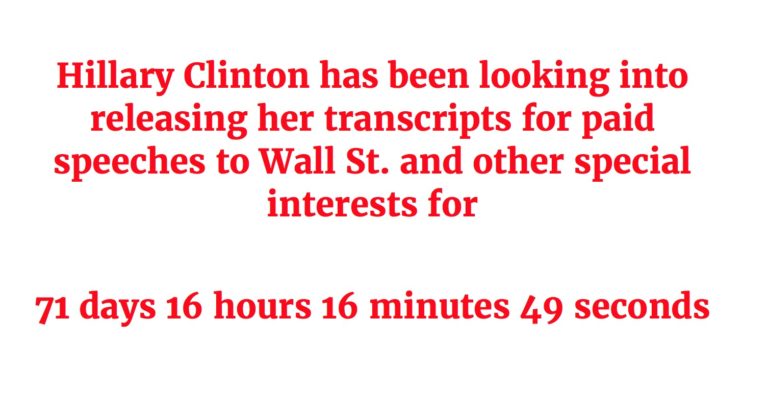