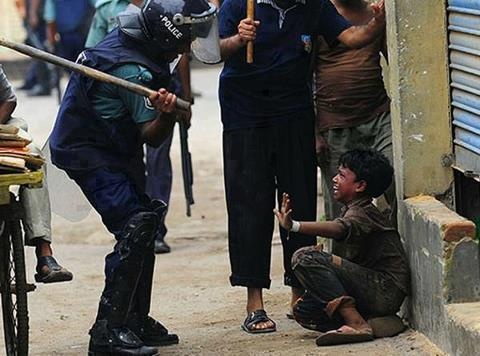 Police in the United States managed to escape prosecution when facing allegations they violated civil rights an incredible 96 percent of the time. This is almost the exact opposite of the conviction rate for everyone else, as normal citizens are are prosecuted at a rate of 93 percent.

The investigation by the Pittsburgh Tribune-Review (the Trib), based on an analysis of nearly 3 million federal records, found that from 1995 through 2015, federal prosecutors overwhelmingly opted not to pursue prosecution. Indeed, the 96 percent refusal to press charges sharply contrasts with the rejection rate for all other complaints — just 23 percent.

Investigators found the most common reasons given for refusing to prosecute officers were “weak or insufficient evidence, lack of criminal intent required under a 1945 Supreme Court ruling standard, and orders from the Justice Department.”

In response to the Trib’s study, Justice Dept. spokeswoman Dena Iverson said the DOJ takes “any allegation of law enforcement misconduct seriously and will review those allegations when they are brought to our attention.”

But the lopsided tendency for U.S. prosecutors to reject charging officers in civil rights cases could easily be seen as validation for outrage at what amounts to police impunity.

“It’s a difficult situation for the legal system in general,” Mel Johnson, assistant U.S. attorney for civil rights cases in Wisconsin’s Eastern District, told the Trib. “Federal and state governments have not succeeded in deterring police misconduct. I would say the legal system has a way to go.”

Prosecuting civil rights allegations is a tricky matter, in general, but the challenge to prove an officer acted “willfully,” which the Supreme Court ruled over 70 years ago, remains the greatest stumbling block.

“The standard is high and challenging,” said Alan Vinegrad, a former federal prosecutor in New York who oversaw civil rights cases. “It’s got to be a willful deprivation of rights, meaning the police officer intended and wanted to either kill or injure the person. Not just ‘it was reckless or negligent’ or anything like that.”

Therein lies the most pertinent dilemma. Because the officer’s malintent must be proven beyond a reasonable doubt, cases where judges find an officer unjustified in his or her use of force can’t necessarily be prosecuted as civil rights violations.

As Craig Futterman, a law professor and founder of Civil Rights and Police Accountability Project at the University of Chicago, points out, juries have a bias toward police officers — evidenced by reluctance or failure to convict — so prosecutors must factor in that tendency when deciding if charges will be fruitful.

Law enforcement unions argue police wouldn’t be able to do their job if they feared acting as they feel appropriately might cause them to be charged with a crime.

Tim Lynch, director of the Project on Criminal Justice at the Cato Institute, described another, more telling, bias:

There’s first of all the general reluctance on the part of prosecutors to go after people in law enforcement because they consider themselves all working on the same team.

As some experts the Trib consulted for its investigation explained, one solution would involve lesser options than prison to increase accountability, while balancing law enforcement’s concern about effectively doing their jobs. Others, like Radley Balko, author of Rise of the Warrior Cop, have argued that mandating police to have liability or similar insurance — making them accountable via their bank accounts — might be the best option.

“This is an area, quite honestly, where the feds need to be bolder and put greater resources in,” Futterman explained. “Indeed, the failure to aggressively bring those cases has allowed too many abusive officers to believe that they can operate without fear of punishment.”

As the Trib summarized, “Even with video or other strong evidence, the defense can argue the officer believed the dead person was armed or was a threat, or the officer had only a split-second to make a decision.”

Just about everyone is familiar with the effectiveness of that argument — I thought my life was in danger.