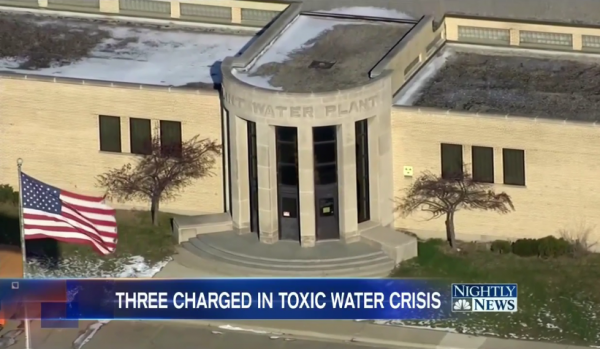 While it may be of  little comfort to Flint, Michigan, families still struggling with their children’s lifelong debilitating heath problems from bathing, playing or even brushing their teeth in water contaminated with lead, three individuals have finally been criminally charged, according to KFOR.com:

“Glasgow is charged with tampering with evidence, a felony, and willful neglect of duty, a misdemeanor. The tampering charge carries a maximum sentence of four years in prison and a $5,000 fine.

“He allegedly tampered with a 2015 report, ‘Lead and Copper Report and Consumer Notice of Lead Result,’ and failed to perform his duties as a treatment plant operator, according to Schuette’s office. …

“Busch is charged with misconduct in office, tampering with evidence, conspiracy to tamper with evidence — all felonies — and two misdemeanor violations of the Safe Drinking Water Act, one involving treatment, the other involving monitoring.

“The attorney general’s office alleges Busch misled county, state and federal officials; conspired to manipulate monitoring reports; tampered with the 2015 report named in the charges against Glasgow; failed to use corrosion control treatment and/or refused to mandate the treatment once dangerous lead levels were detected; and he manipulated water samples by telling residents to ‘pre-flush’ their taps the night before their samples were drawn and/or failed to collect required samples and/or removed results from samples to be included in the 2015 report. …

“Prysby faces the same allegations and charges as Busch, plus an additional felony charge of misconduct in office. That count states he authorized a permit to the Flint Water Treatment Plant knowing it ‘was deficient in its ability to provide clean and safe drinking water for the citizens.’

“That charge carries a maximum penalty of five years in prison and a $10,000 fine.

“The maximum penalties allowed for the other charges against Busch and Prysby are five years in prison and a $10,000 fine for the misconduct count, four years and $10,000 for the conspiracy count, four years and $5,000 for the tampering count, and one year each for the Safe Drinking Water Act violations. The latter also carry $5,000 fines for each day the accused were found to be in violation of the act.”

Attorney General Bill Shuette said that there could be more charges coming, and that no one, regardless of stature, would be exempt, as reported by KFOR:

“Schuette promised that no one guilty of wrongdoing would escape justice, no matter ‘how big a shot you are.’ No one is above the law, not on my watch,” he said.

Many Flint residents believe that the blame goes right to the top man, Governor Rick Snyder. It will remain to be seen who the other guilty parties are. The top EPA administrator responsible for Flint’s water crisis, Susan Hedman, resigned last January. But, according to the Washington Post, the Flint water crisis was one that didn’t have to happen:

“The Detroit water system, which had supplied Flint for a half-century, fought fiercely until 2013 to keep the city as a customer. … Had Flint officials stuck with Detroit’s water, they would not have had to rely on the Flint River as an interim water source and lead would not have leached from the city’s aging pipes into the taps of some of its 100,000 residents.”

It’s clear that the authorities cannot be relied upon for accurate information or protection, making it even more important to be sure we know what’s in our food and water.