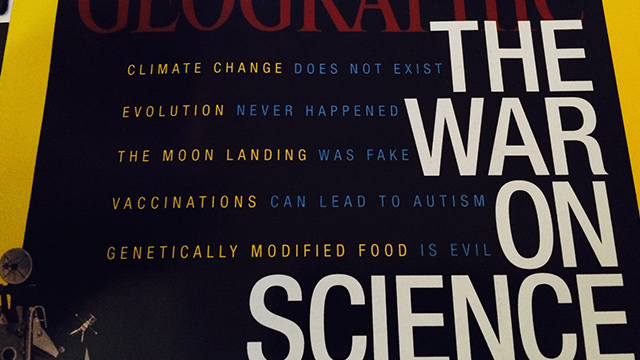 There are a lot of liars in the science world. That should be an oxymoron, but it’s not. Science by its definition means a search for truth without regard for one’s personal preference. You know, the hypothesis, the experiments to see if this is so, and then conclusions based on evidence. But in today’s culture lying is preferred above the truth – especially if there is grant money, kickbacks or flat out bribery involved. Perhaps Steven Soderbergh’s  epic flick could be reborn as “Science, Lies and Money.”

This is the case with Bruce Murdoch, a neuroscientist who faces 17 fraud related charges about his fake research concerning a “breakthrough treatment” for Parkinson’s disease. Science Alert has the details:

“In a trial at the Brisbane Magistrates Court in Queensland, Australia last week, Murdoch was found guilty of fraudulently receiving a $20,000 grant to fund his bogus research – which he knew had no actual basis in fact.

“He then tried to get away with it by forging content forms from study participants, ‘one of whom was dead at the time the alleged took place,’ Amy Ellis Nutt reports for The Washington Post.

“[Murdoch] co-authored a 2011 paper published in the high-profile, peer-reviewed Journal of Neurology, in which he reported the results of a clinical trial that supposedly put this new Parkinson’s treatment through its paces, with stunning results.

“But Magistrate Tina Privitera, who resided over the case, told the court that there’s no evidence that this clinical trial ever actually happened – Murdoch made it all up.”

Maybe Mr. Murdoch, who had held a research position at the University of Queensland, should try a major in creative writing.

Fraud can come in all shapes, sizes and directions. Bottom up, as in the case of Murdoch. In the instance of the so called research claiming that GMOs are safe, fraud comes from the top and around every corner. In fact, the entire paradigm of GMO safety is based on a pack of non existent tests and bogus non scientific pronouncements made back in 1992 by a corrupted FDA. In a nutshell, they proclaimed GE foods were “substantially equivalent to regular non GE foods.” Does that sound like a solid evidence based claim to you?

Steven Drucker, a lawyer and activist, formed the Alliance for Bio Integrity and sued the FDA to find out the truth. His book, Altered Genes, Twisted Truth, exposes the massive fraud and cover up that few Americans know. Here’s what Jane Goodall, Ph.D. wrote about the book, as reported by the Health Ranger:

“… The U.S. Food and Drug Administration (the FDA)… it apparently ignored (and covered up) the concerns of its own scientists and then violated a federal statute and its own regulations by permitting GE foods to be marketed without any testing whatsoever.

The evidence further shows how the [FDA] agency assured consumers that GE foods are just as safe as naturally produced ones — and that their safety has been confirmed by solid scientific evidence — despite the fact it knew that no such evidence existed.”

When French Professor Gilles-Eric Séralini, published peer reviewed research documenting the presence of cancer in rats fed Monsanto (GM)NK 603 corn, the global GMO lobby shouted foul, condemned his research and demanded a retraction from Food and Chemical Toxology. It was retracted. But the truth can’t be stopped. The same study was republished by Environmental Services Europe, and the Seralini group has won defamation and forgery court cases against the liars.

To all budding future scientists! Eat clean non-GMO food and never compromise the truth. Seek it until you find it. We’re counting on you.